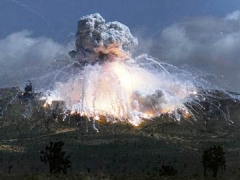 When I was in third grade I remember doing duck-and-cover drills.

No, I’m not old enough to have gone to elementary school in the 1950s.  My dad worked at the nearby air force base, where the government was busy realizing Reagan’s Strategic Defense Initiative, or “Star Wars” if you were a kid like me and keyed into anything on the six o’clock news.  Working for Martin Marietta at the time, I believe, my dad and the whole base in Southern California were nose to the grindstone on the MX missile program.  Conservatively dubbed “The Peacemaker,” the MX was capable of delivering ten 300 kilton warheads (each alone with twenty times the power of Hiroshima).  While I don’t really know if the many MX test shots from the base had live nuclear payloads, I think it’s unlikely (the internet probably knows, but it wasn’t readily available on Wikipedia).

In addition to playing host to the MX program, the base also routinely launched Delta rockets carrying all manner of military payload.  In 1986 there were two failed Delta launches from Vandenberg, that base where my dad worked so diligently to do his part in our global pissing contest.  The first in late August of 1985 and the second in mid-April of that next year.  I don’t know which one I remember so vividly, but I’m fairly certain it was the more dramatic of the two: the 1986 explosion of a Delta 34D, which happened only nine seconds after liftoff and was therefore right there in terms of the experience of those nearby.   I was one of those nearby.

We were out at recess at the time.  The base itself couldn’t have been more than ten miles from our school, and I’m not sure how far the SLC-4E site was inside base lines – but from the playground that morning I remember thinking it looked like a huge orange mushroom cloud.  A massive rumbling followed by a huge orange-red cloud blooming from the ground in the distance.  The yard duties blew their whistles and all us kids were ushered back into our classrooms.  The teachers instructed us all to climb under our desks and put our hands behind our heads.  I’m sure this is something they were instructed to have us do, but I’ve thought since then how it must have seemed eerily full-circle to the Cold War alums that were the thirty-something teachers of the day.

I can remember one kid cursing “Libya,” likely owed to the bombing operations the US had carried out there just three days prior and which had been all over the news. But for the most part we kids had no idea what was going on.  We sat like that for maybe an hour, it seemed forever in memory, and then an “all clear” message was broadcast over the PA system and it was all over.  From then out out, however, we were subject as a class to regular duck-and-cover drills in preparation for a worse accident.  An accident that never came, thankfully.

And that’s why, when all the old folks are talking about hiding under desks in gradeschool, I can join in the conversation.

3 Replies to “duck and cover”