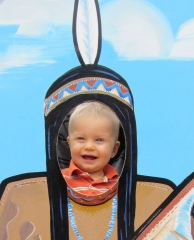 Hit every green light this morning on the way to work.  I love that.

Cohen had his one-year pediatric check-up visit this past week.  At this visit the doctor takes stock of your child, taking inventory of their development and reporting back to you on such arbitrary things as head-size as compared to average, weight compared to average, mobility, verbal skills, and the like.

Whether it’s always been this way or not, these visits are also a time for parents to sit back and revel in the uniformity (or non-uniformity) of their progeny.  I suspect that many modern, rat-race respecting, parents could, in fact, digest the findings of these check-ups with some amount of heartburn.  I try not to allow this; for the most part I don’t care if only my kid and two others globally have heads of a size.  For someone overly concerned with benchmarks and milestones and having their child be “on schedule,” however, I understand this could be a nervous moment.

The suspicious among you might say that all my cool aloofness is perhaps born out of necessity.  Cohen, you see, is all out of whack with where Keaton was at this time – and where most other kids are, to boot.  A year old and he’s not crawling, not walking, not even showing the slightest interest in flexing his leg muscles.  While we were home in Florida during the RV trip, his cousin, three months his junior, was crawling circles around him while Cohen looked on, unimpressed and apparently uninspired.  Heck, he only just started pulling himself up to sitting under his own power just a few weeks ago.

The doctor was interested in this.  Sharaun explained that he’s far from immobile.  In fact he can scoot with some mean velocity, so quickly that I’ll often turn away for a second to find he’s inched off into another room.  At the same time, the majority of attempts to get him to stand on his own, clutching your fingers in that way babies do, are met with his pure indifference.  In the bouncer he simply tucks his legs up and rests his weight happily.

Testing his reflexes, all things appear to be assembled correctly, so that’s a relief.  Initially, the doc wondered aloud if she should have him “evaluated” (whatever that means, I assume by some developmental/physical therapy person).  Hearing this, Sharaun said she could feel her heart rate double in her veins.  As soon as she’d considered this, though, the doctor reneged on the thought and instead opted for the much more parent-palatable advice to, “Call if he’s not crawling on his knees by fourteen months.”

This seems ultimately reasonable to me… I mean exactly whose schedule is the kid on, anyhow?  Not mine; not Keaton’s; not the world according to the WHO statbook, as far as I’m concerned.  While I want little man growing and advancing as expected, I’m not really in any great hurry for him to start toddling around the house.  It’s seems funny to dedicate five paragraphs to saying something like, “I’m not concerned in the least,” but… I’m not concerned in the least.

As far as words go, he’s got “uh-oh” and sometimes what I think is a cognizant “thank you,” but not the apparently expected “mama” and “dada.”  To be fair I don’t remember when Keaton’s then-otherworldly vocabulary developed and flourished, so I’m not sure if Cohen’s is behind or even with her or what.  I do know, though, that he’s entirely doomed if I’m going to hold him up to her as the example of development in the talking and vocabulary department.  So, again, I’m not that uptight about it.

One Reply to “pfffft…. whatever”