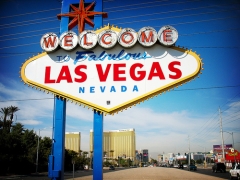 Man I wish we hadn’t gone to Vegas.

The Grand Canyon was, to me, the epitome of what’s great about this trip.  An outstanding National Park, expertly run and managed, clean, easy to get around and enjoy – and so dang beautiful.  Part of this could have been my expectations, as I was assuming the Canyon would come up on us while we traveled along the same desert flatland we’d been in for days.  I hadn’t even imagined the forested environment at the park’s elevation.

Before we left I had people tell me all sorts of things about the places we were going.  “Mt. Rushmore is pretty boring.”  “Niagara is a five-minute stop, at most.”  “The Grand Canyon is ‘OK,’ but it’s really just a big hole, it would be hard to spend multiple days there.”  I tell you what, though: No place, not a single one, on this trip inspired me the way that one did.  Maybe it’s because we’re nearing the end and it was such a pleasant surprise, I don’t know.  What I do know, however, is that I’ve got to get back there and do so “adult” hiking.  I want to go rim-to-rim, want to raft… something about that place made me want to settle down and never leave.  Thanks Mike for the recommendation to stay a little while, you were spot-on.

And if the Grand Canyon was the epitome of what I wanted out of this trip, Las Vegas was the antithesis.  When I finally hit the pillow last night around midnight I told Sharaun, “I think it was a mistake bringing the family to Vegas.”  Don’t get me wrong, I think I could perhaps have a decent time here with a pack of friends – but as far as “harshing the buzz” of our current trip, this place was all about it.  One big commercialized, sprawling shopping mall with the worst of human proclivities on display at all times.  All glitz, glam, spray-tan and popped-collars, thudding bass and costume-jewelry and lipstick-on-pigs – it was the polar opposite of what I was seeking from the trip, and my personal nightmare in terms of “things to do” (shop, waste money, dance at a club, pay for sex, etc.).

Thankfully, it was just a one-night “miss” and we’re closing the whole thing down with another few days in God’s country.  And, really, we did have some fun… the Bellagio fountains were cool, the gardens inside too.  The volcano at the Mirage was neat; the Atlantis show was fun, and dinner was good.  Other than that, blech.  Maybe some other time, in some other context… who knows…

And then it’s over!  Keaton’s new video is uploading now, look for it soon.  See ya!

2 Replies to “ups and downs”