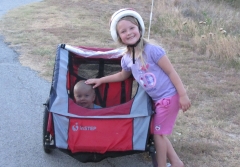 A week from today and I’ll be pulling this RV into our driveway at home.  The next day I’ll return it to the rental joint.  The following Monday I’ll rejoin corporate zombieland and trudge among the cubicles groaning for reeeee-sooouurces, sche-duuuules, and the like.  I’m not looking forward to going back.

This week we stopped over in New Mexico.  On our route is a little winery run by a fellow I used to work with at the sawmill.  Only he doesn’t work at the sawmill anymore.  He makes wine in Mew Mexico now.  In his tasting room we had the talk again (I’ve had the same talk with him over dinners in Shanghai, Austin, and California).  Y’know, the talk about running away from corporate indentured servitude, about making your own road and tossing the paycheck for the passion.  One thing this trip impressed upon me, seeing so many old friends in so many places across the country doing so many different things: There’s a lot out there to do.

I almost covet my job, thanking God for the work and the income and the fact that I don’t hate it.  All those things are good to be thankful for.  But when I see so many people doing so many things and living just as happily and fruitfully it reminds me that my job isn’t the only job.  It’s not the only way to make ends meet.  Right now it’s working well, sure.  But sitting at that winery, walking around that cheese farm, riding in that fire truck – those are all good pieces of information to override the typecast poison of the modern cast of the American Dream.  It makes a guy think that there’s infinite mobility out there, and that nothing is good enough to be resigned to, y’know?  I mean there’s gotta be a middle-school math teacher position open somewhere in upstate New York… right?

Anyway, gloom aside – I’m really looking forward to our last week.  Sharaun’s driving us towards the Grand Canyon as I write in the passenger seat and we’ll spend two full days there  bumming around.  After that we decided to make one more last-minute change to the itinerary and toss Death Valley for an evening in Vegas.  The goal is to get in early enough to take in a show, wander around, and eat some buffet.  I’ve never been, and we’ll be at the Hoover Dam that same day so it just made sense.  I know, the only people who take a baby and a five year old to Las Vegas.  After Vegas we close the trip with a few much-anticipated days with friends for the Fourth down in the California high desert.  Can’t wait.

I’m off to edit together Keaton’s newest video, with luck I’ll get it done on the road and have it posted before we arrive at the Canyon tonight.  Until later.