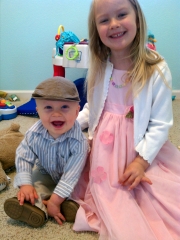 It’s Saturday as work on this entry begins.  Day four as Mr. Mom.  Over the hump and with aplomb, I might add.

Presently it is 6:30am.  It’s that time of year where it’s light outside beginning around 5am here in California so it doesn’t feel so early when judged by surroundings.  But it is early; early to have Cohen up, bathed, and fed already.  Early to already have a load of laundry out of the washer and into the dryer.  Early to be on my third cup of coffee.  By eight o’clock Cohen will be back asleep… somehow the whole schedule slid forward by about an hour and a half when I was waking everyone so early to get them fed and readied before the daycare drop-off.

I’m not complaining.  I’m enjoying my morning.  Keaton’s still sleeping and I decided the grey skies outside were calling for a spin of Steely Dan’s sophomore record, Countdown to Ecstasy. (Note: somewhere in the middle of this paragraph a lot of time passed, that’s how writing goes.) In fact these days with just the kids and I have really been a blessing.  I kind of lost myself in it this weekend; stopping once to think how great it was to be able to do nothing but lounge on the floor playing peekaboo with Cohen or coloring with Keaton.  I like to think of it as a preview of the coming seven weeks on the road: plenty of time to spend enjoying my family and the fun we can have together seeing and doing new things.

Sunday after church (which, I should add, I was early for – not a regular occurrence) I decided that I’d take the kids out for lunch.  I didn’t feel like making their lunches and I’d already half-planned to do something so I’d packed food and bib and spoon and snacks for Cohen in the diaper bag.  Part of me knew it could be disaster… one parent and two kids in a busy restaurant, but another part of me anticipated the challenge – and even more so anticipated looks.  Dads… you know what “looks” I’m talking about: The “Oh gosh what a good dad he must be!” looks you seem to get whenever you’re out just you and the young’ns.  I thought I’d written about it before but I can’t seem to find it.

Anyway, dad’s out mom-less with their kids really do stand to get a swollen head.  People look and point and nudge and talk, it’s a good feeling but part of me also thinks it’s sad that being a “good dad” is something rare enough that we have a warm emotional reaction when we see someone doing it.  But, whatever, I’ll take it gladly.  It might help that Sharaun and I made some fierce-cute kids, like cute enough to strip the hide of a live steer – or some other such meaningful expression of a hearty cuteness.  It might also help that we’d come straight from church and I’d taken care to dress both kiddos as sharply as possible (y’know, to prove to the parishioners that this lone-dad has it going on… and to get those fond smiles from the pews as well…).  The image accompanying this post shows what sort of merchandise I was showing-out.

Sharaun get’s back today (Monday, not the “today” of writing), and it couldn’t come soon enough.  Goodnight.