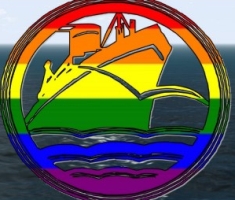 Today was the first of my six days without Sharaun.  By now she’s on her cruise ship and is giddy with some pre-teen New Kids on the Block fever.

The day started early as Sharaun was busy getting up and out around 4am.  I slept poorly after she left, tossing and turning until the alarm woke me at 5:30am.  I had a 7am meeting I needed to be on, one of those things where your manager’s manager’s manager would be asking your opinion on something.  Before that, however, I had to get Cohen over to the house of our kind friend who offered to watch him today.  We pulled into her driveway at 6:40am; not too bad.  Keaton colored groggily in the car, waiting while I dropped off Cohen and gave some terse guidance around his daily routine.

We left around 6:50am, somehow found time to run through the McDonalds drive-thru and grab some McGriddles and still make it back to the house by 7am on the dot. I dialed into my call and we ate while I sat on mute waiting to be called on.  The call went the full hour and afterward Keaton and I were out of the house and on the road again by ten after.  Sharaun had made arrangements for Keaton and Cohen to go to a local daycare on the days I had to work, the sawmill offers employees a complimentary week of daycare per child per year for just this kind of situation.  Since the ratio of teachers to babies is higher than teachers to fiver year olds, they had room for Keaton every day but could only fit Cohen in on two of them.

I have to admit, I was probably more nervous than Keaton whilst dropping her off.  She had told me in the car that she might be “shy” and keep to herself… letting me in a little on her through process, knowingly or not.  I tried to play it smart, I walked her to her classroom, introduced her to her teachers, and promptly gave her a big hug and kiss before turning quickly to leave.  I didn’t want to linger, as I was worried it might give her feet time to cool and re-think how “OK” she was being left there.  I caught her by surprise, I think, doing the whole drop-off so ninja-quick.  Out of the corner of my eye as I was leaving I saw a look of trouble and doubt blooming on her face and, although my heart was exploding at seeing it, I strode firmly out the door without a lingering glance or any hesitation.

OK so when I got to the car I nearly had to fight back tears.  Keaton can be “sensitive” socially.  She seems to care, already, at this age, about how people receive her and she wants to be liked.  I could tell she was nervous and shy and more than a little worried about fending for herself among this classroom thick with well-established friendships.  (Or maybe it was all in my head… and I was just projected the old social fears I myself once had onto my daughter, who knows.)  I guess it’s fair to say I was feeling anxious on her behalf, hoping she made quick buddies and fit in and had a good time.   And yeah, I’ll admit that I called the place at noon to get a halfway-point status report.  I’m that dad, apparently.

Happy to say, though, that Keaton loved her day at daycare and is excited to go back tomorrow.  She made friend and they palled around together most of the day; they had music time and she learned new songs; they had an art table that she stuck close to; she had hot dogs and vegetables and tots for lunch.  Not only that, Cohen was a good kid for our friend, napping per schedule and being generally all-around awesome.  After day one, I’m feeling up.  Also could’ve helped that the day at work was busy enough that I didn’t really have time to worry about anything but the present…

I got this dad stuff licked.  Hurry home, mama; we miss you!

What a boring entry.  I’d go back and delete it were I not just happy to have written. Goodnight.