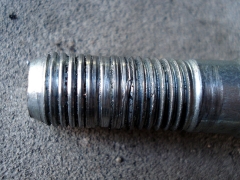 For Christmas Keaton got a new big-girl bike.

When I purchased it online it didn’t have an option to ship with training wheels.  Though I knew she’d likely still need them (she’s only ever ridden with them), I suppose I was hopeful that maybe we could rush right to the dad-runs-alongside kind of learning to ride and perhaps forgo them.  A few weeks back, when the government gave me sunlight after work and the weather warmed enough, we tried this.  Results were as expected: she’s just not ready to try without training wheels yet, especially on a bigger, more daunting, bike.  So I took a “to-do” item on my phone to purchase, or borrow, a set of training wheels for her new ride.

That was three sets of unusable training wheels ago.  The first set, hand-me-downs from her good friend Jake, wouldn’t fit on her bike – a theme which would come to repeat itself.  See, the frame where it rests on the rear wheel axle is all thick stylized tubing… and most training wheel attachment and stabilization hardware assumes some standard frame construction.  That being the case, the borrowed wheels wouldn’t work.  I purchased two more sets from the local big-box joint, and the hardware for both of those was also a bust.  No way to get them attached to her crazy new-fangled frame.  Worse, in the process of trying set after set I managed to strip the axle nut so badly I almost couldn’t remove it.

Last night, however, we happened to be at the Wal Mart and I noticed they carried a type of training wheel I’d not yet tried.  Now familiar with the specifics of my daughter’s bike which caused the incompatibility, I quickly inspected them for feasibility.  Hooray!  My visual inspection said they were at least plausible, but I’d have to buy them to be sure.  So we did, paid something like $13.  Tonight I attempted to put them on the bike, and, what do you know – it actually looked like they’d work.  At least that was the hope until I managed to crossthread the axle nut onto the bolt – permanently ruining and hope of reattaching the wheel again.  With the first 1/8th inch of thread simple sheared flat, I’m out of luck.

Soundly and thouroughly defeated, I removed the entire back tire and will be taking it into the local bike shop tomorrow to see about either getting a new axle bolt, re-threading the current axle bolt, or getting an entirely new replacement tire if neither of those options is (are? – man I always mess this up) possible.  Keaton made sure I wasn’t given a pass on this – in fact she told Sharaun immediately that I “broke her bike again” (the first “break” being the stripped nut).  Oh yeah Keaton?  Well… dad can… pay to have someone else fix his mistakes.  How about that, huh?  How about that.  Hopefully the bike store dudes won’t laugh me out as I walk in with an 18″ pink and purple bike tire…