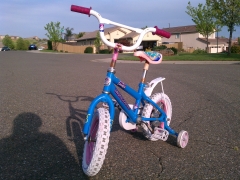 Shhh!  Don’t tell anyone, but I made a conscious effort to dial-down my work investment this week.  I really did.  I was sort of sick a couple days so that forced slowdown helped, but I also tried to do less.  You can see, from the writing, that it worked.  I feel better (not bad at all) about it.  Let’s go.

I don’t know if it’s the lovely Spring weather or what, but lately Keaton’s had a renewed interest in riding her bike.  I talk more about the whole training wheels saga later; right now we’ve just been getting out of doors almost nightly and riding small suburban circuits.  While we ride together, I can help but to do a bit of dad showing-off… dredging up muscle memories made in my youth and popping and riding wheelies (on my mountain bike, no less), riding with no hands, “fishtailing,” “endo’ing,” and bunny hopping.  (I think) she finds it all terribly impressive, and a dad’s gotta keep up his Superman veneer, you see.

Monday evening Sharaun was at the gym and Keaton, Cohen, and I had all gone on a long walk around the neighborhood.  Keaton chose to ride her bike and after we got back home she joined up with a group of neighbor girls who were also out riding bikes in the cul-de-sac across from our house.  For a while, while the sun was still well enough above the horizon, I stretched out on the grass in the front yard and played with Cohen there while she rode.  Then, as dusk came and the sun was no longer there to warm us, Cohen and I took our leave of the lawn and headed inside.  I hollered at Keaton that she could stay out and ride with the girls.  She stayed out there and cycled around in circles until after the streetlights came on and all her friends had to go home too.  It was after eight o’clock before I stepped outside to call her back.

Later, I learned that she was absolutely thrilled to be given this tiny freedom.  I considered it quickly at the time, only just briefly, for it really isn’t a situation she often finds herself in.  She’s only just five, and the times where she’s “alone” are usually playdates with friends or in childcare at the gym or church.  She hasn’t really yet experienced the empowering rush that I can remember as a kid when you felt that the world (as big as it was to you at the time in your radius of four of five suburban blocks) was yours to explore and discover.  But for Keaton that night she was out hanging with the big girls.  Riding bikes with no parents, laughing and playing and having a grand old five year old time.  Nevermind that I could hear her the whole time through the front screen door, or that I could see her by craning my neck from my seat on the couch – to her she was unchaperoned.

As she was coming in she said to me, “You can do that again Dad; let me ride by myself.  I wasn’t scared or sad at all; it was fun.”  It’s fascinating to try and plumb the psychological implications of what your kids say and do.  Maybe this little self-affirming comment was her way of admitting that, in fact, she may have been a little scared or sad to begin with – but that those notions soon passed and she was thrilled to realize that there is a world off the apron strings.  I figure one thing I can do is try and give her an idea of just how big and wonderful that world is, maybe grow in her some passion to explore it and test it.  Then again, I have no idea what I’m doing here.

OK, the other thing I wanted to capture about that evening bike ride.  I mentioned I could hear the girls in the circle through the front door, and I couldn’t resist the temptation to stand there and eavesdrop a bit.  I’m glad I did, because I got to overhear my daughter bragging to her friends.  “Hey do you guys know that my dad can lift the whole front wheel of his bike and ride around?  He can also ride with no hands and jump his whole bike off the ground!”  Hearing this made my heart swell, I tell you.  Of course the other girls were quick to represent their dads in response, I heard lots of “My dad does X,” and “Yeah and mine can do Y!”  If you’re not a dad of a little girl, I don’t think you can even approximate what emotions this evokes in a man.  It’s primal, tickling something in us which dates back to primitive times; and it is so satisfying it’s hard to describe.  (Pat just wait.)

Just wait until she’s fourteen or fifteen and reality comes crashing in as she realizes I’m not but a human after all, and a flawed one like the rest of us at that.  Owell, until then I’ll enjoy the view from this pedestal.