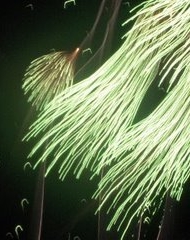 I don’t know if you guys have seen the movie 127 Hours.  I don’t write about pop-culturey things all that often (I did moreso back when the blog started in the aught-tres, when I was still figuring out what this thing was for), but I wanted to write about this movie a bit.  Not about the story, but specifically about the use of one song in the film.  For those who’ve not seen the thing, I won’t be ruining it or anything so no worries (not that most everyone isn’t at least passably familiar with the story anyway).  Is a movie even pop-culture?  I think so.

Anyway, I wanted to write about how expertly the film used the Sigur Rós track, “Festival.”  Gotta be my favorite use of a song in a movie in a while.

If you’re not familiar with Sigur Rós, you’ll likely react like my wife did when I tried to get her to appreciate them so many years ago.  Honestly, her reaction wasn’t entirely unexpected… they aren’t the easiest act to get into for most.  I mean, if you can get around their lengthy songs you’ve then got to make peace with the fact that the band is from Iceland.  Not that Iceland is a bad place, but, moreso that this means the band sings in a foreign language – which by itself turns a lot of folks off.  Worse even than that, most of the time they sing in a made up foreign language – one that has no meaning and sounds like gibberish (the rest of the time they sing in Icelandic; I can’t tell the difference).  The “language,” called Vonlenska, or “Hopelandic when translated to English (hey, the name of the language is a real Icelandic word, at least), is entirely unintelligible and the band has stated that they want folks to hear whatever they want to hear in the lyrics.

Sharaun, like many, doesn’t really do songs with no words (ala Mogwai, Mono, or Explosions in the Sky, etc.) or songs in foreign langauges (Air, Malajube, Dungen, etc.).  You better bet, then, that a band whose forte is either songs with no words, songs sung in Icelandic, or songs sung in a fabricated nonsense language ain’t high on her list.  That’s cool, I can accept that.  I actually kind of like the notion of lyrics in an imaginary meaningless language.  For one thing, it’s kind fun to make up your own words and “sing along” to whatever you hear.  I mis-hear and sing words to songs wrong all the time, and Sigur Rós solves that problem out of the gate by not having any real words to mis-hear.  For another thing, my opinion says your music has to be pretty darn strong to pull off singing in gibberish.

And strong songs they are!  Sigur Rós has a knack for laying down songs which often border on “anthemic.”  Things that get stuck in your head and make your chest swell with feeling, things that sound like national anthems for pretend countries or old familiar spirituals or other such emotionally-tied things.  In fact, the band’s music seems to inspire all sorts of folks – particularly those in the advertising world as the Sigur Rós themselves pointed out on their blog about being ripped off in commercials all over the world (it’s so prevalent they actually wrote about it again here).  Their stuff is catchy and often big and important sounding.  And the track used in 127 Hours is one of these grand affairs.

The song (listen here while you read), used in an emotional climactic scene near the end of the movie, is called “Festival” and is a nine minute piece (I almost called it an “epic,” but length is fairly common for the band) from the 2008 effort, með suð í eyrum við spilum endalaust.  The first five minutes or so of the song are quiet and singsong, all done in Hopelandic (and this meaningless).  Around the five minute mark the meat of the track, a crazy-good bassline which dominates, kicks in.  The track ends with an crashing and repetitive

In 127 Hours the song more than merely underscore or support the film, it absolutely defines and in fact drives the emotional engine of the scene.  Yes, the viewer has a lot invested in the story at this point, but even still the scene wouldn’t be nearly as effective with the volume muted (says me).  Honestly, whoever picked the song did such and excellent job, I don’t think I’ll ever be able to listen to it again without thinking of the release of pent-up emotion that came with it during that scene.  The closing minutes of the track are so well-matched to the tenor of the scene.

No for real guys, if you haven’t seen it you really should – and pay particular attention to the finale, the denouement, the emotional climax of the thing.  Hear your heart beating in time with that crazy-good song?  Feel the way you’re edging up on your seat as the kick-drums go double-time and the strings inch towards cacophony?  Watch your fists clench as the horns come shining into the party, brassing things up and taking the layered madness just another notch towards the precipice?  What’s that, crazy cymbals?  Insane rain-on-a-tin-roof snares, trumpet-gone-wild, do I hear an ever-loving glockenspiel?!  Land of Goshen!, who picked this thing?!  I gotta buy this cat a beer.

So kudos to you, soundtrack-type person for 127 Hours, you masterfully applied this wonderful track to the film.