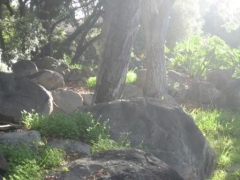 I’ve been taken by this vision, fantasy really, of one imagined morning on our coming RV odyssey.

We’re in Yellowstone and the morning is cool.  Or maybe we’re in the grand canyon and it’s warm and the dust hasn’t yet been kicked up into the morning air.  Come to think of it, it doesn’t matter where we are.  Maybe it’s better in Yellowstone because we’re there so early in the season and we’re posting up at such out of the way campgrounds that there’s a good chance we’ll be the only ones there.  Maybe not, but I see it that way in this daydream.  It’s just us parked in the middle of some sprawling wilderness.  The kind of place where there’s a stream and maybe you see a moose wandering around in the morning mist.  But it’s just us.  Three or four little parking skirts on dirt loops, no hookups no wifi not even vault toilets.  It’s true, we’re staying two nights at places like this.  The ranger I called and spoke to said there’s a good chance we’ll be lonesome out there, since the spots only open that same week we arrive.  Maybe that’s what planted this seed.

Anyway it’s early morning and I’m awake and the family is awake and maybe I’m standing outside the RV smoking my pipe.  The scenery is enveloping and the silence is like when my buddies and I used to wake in the morning while camping – not a modern city sound to be heard.  Birds and condensation dripping and a stream rushing and maybe the rustle of a breeze.  But no engines and no sirens and no airplanes.  Can’t really avoid airplanes these days I suppose, even period-piece movies get shots fouled by airplanes missed in the editing room.  You’ve got Sir Gawain on his steed charging up a pastoral green hillock and real faint way off in the background the contrail of 747 bound for LaGuardia.  The bored passengers have no thought for their unintentional anachronistic cameo.  Some jerk on the internet first noticed it in the theater and then someone screencapped it from the Blu-ray.  So maybe there’s a plane; you can’t get away from them as well as you can everything else, but it doesn’t really matter.

I’m standing outside, the door to the RV is open and the family is knocking around inside.  Their close and I’m glad we’re here together but I’m having what they call a “personal moment.”  Gazing out into God’s country and thinking about how small I am how the stuff I worry most about in the world is some of the most insignificant in the world.  E-mail and human resources; paltry compared to the glacier-cut granite slopes hemming in our private campsite.  I’m out there marveling and puffing my pipe and – listen this is the important part, the part that makes the fantasy, the daydream capstone  – from out of the RV’s front-cab windows pours the Grateful Dead.  Yeah I said no noise but in this case it’s not noise it’s all compliment.

It’s not just any Dead.  It’s the 1976 New Year’s Eve show from the Cow Palace.  It’s one of my personal favorite shows; the band was so hot, 100% on and soaring.  I think it’s an underrated show.  If you haven’t heard it, you should go listen to it.  Sharaun says she finds the Dead repetitive; it’s actually a pretty fair criticism as criticism goes so I can’t really fault her.  But in the morning of this fantasy maybe “Eyes of the World” is blaring and it’s just blending perfect with my morning in the middle of everything and nowhere.  Tobacco always makes me salivate, so I’d be spitting on the very landscape I’d be adoring – maybe that seems contrary but it has some sort of old-country charm in my head.  Anyway, the Dead are just burning with a fever through the cab’s windows and for those ten minutes everything is about as perfect as things get.

It’s me and the family and God and the wildness and the Dead.  Oh man how silly.  But that’s the fantasy, that’s it to a tee.  I see it all the time and I’m the kind of foolish that’ll try and make it happen when that morning comes.  I’ll put on the Dead and light my pipe and stroll around and it’ll be good.  Kind of silly to pre-see it like that, though.  The best mornings will be the ones I haven’t pre-seen.  Those, those’ll be the knockouts.  I sometimes think I have too much time to think about this trip; that I better cool it with all the daydreaming or I’ll ruin the thing for what it can actually deliver. We’ll see.