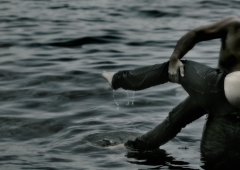 Tomorrow we have to register Keaton for kindergarten.

Yes, I’m amazed too.  Kindergarten?  Already?  I mean, people, it’s only January.  School doesn’t start until August.  What’s worse, registration for elementary school, even something as basic is kindergarten, is completely blown out of proportion in our upper-middle-class whitebread part of suburbia.  Parents get stupid, lining up an hour before the school office opens in order to secure their kids’ spots.  Spots?  In a public school?

Yes, these are uptight yuppies.  Their kid won’t be bussed to another, slightly more dusky on average, district.  No manches; es impossible.  Their kid’s gonna get the early half of the day, or the late half of the day.  Gonna get the new young teacher with a rep for awesome standardized test scores and a kindred hatred of less-than-whole grains and gluten.  Yeah, it’s uptight around these parts… parents seem just a bit worked-up.

Us, we’re clueless.  We had no idea registration was even tomorrow until a coworker of mine mentioned it in passing last week.  We don’t know what time the school opens tomorrow to begin this ritual, we don’t have a copy of Keaton’s birth certificate, we don’t rightly know if we even need one.  At first, all of this made Sharaun mad.  “What are they going to do?!,” she asked incredulously, “Not let my kid in a public school the law says I have to enroll her in?”  It’s a good question… but the uptight parents answered, “No, but they’ll ship her off to a crappy school if she doesn’t get into the one she’s zoned for.”  This incites fear in my wife, and now she feels all guilty and unprepared.  I hear it in her long sighs as she thinks about how unprepared she is to go down there tomorrow morning (we’re guessing 7:30am, but we heard about one guy who lined up at midnight).  What is this, tickets to Zeppelin?

And how would we know?  First time for us.  I remember, back in high school, my friend Mike used to tell me about everything.  “You know that scholarship application period ends next week, right Dave?”  “You gonna sign-up to take the SAT this month?  You’re running out of time.”  I guess I’ve always been the guy who’s not quite paying attention… keeping tabs on just enough traffic to not get run over, but still sometimes crossing when the signal is a red hand.  Sharaun’s the same.  Maybe we’re doomed.  Slated to always miss soccer registration, always forget piano lessons, be the ones who don’t sign the permission slip.

I won’t tell Sharaun I’m concerned/worried about this whole kindergarten registration thing, I don’t want to make her feel worse than she already does.  But I am; worried that is.  I guess tomorrow we’ll see how it all goes.  Maybe it’ll be no big deal and she can swoop downtown and pick up a copy of the birth certificate without risking Keaton’s “spot” in the stinking public school down the road.  Who knows.

One Reply to “and how would we know?”