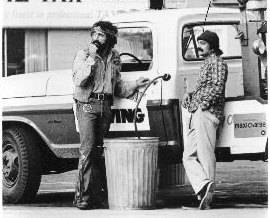 Two of my friends at work had gasoline siphoned out of their cars while they were in the parking lot; during work.

I wonder what puts one in this circumstance?  Is this person on foot?  With a length of rubber hose coiled and hidden under his sweatshirt and a couple milk jugs tied through his beltloops, maybe?  Or are they driving?  Burning gas to steal gas, likely not even breaking even due to standard fuel economies and the volumetric constraints of such thievery?  It seems such a strange position to find yourself in.  You really need gas that bad?  Wouldn’t it be easier, and less risky, to panhandle on the train for a couple hours?  Hell, if you’re on the train, you don’t need gas anyway – you just got free money!  You’re a green thief.

Do you guys know how to steal gas?  It’s not hard.  Open the fuel door, remove the cap, drop in about three feet of rubber hose, make a loop that touches the ground, and suck hard on the loose end until the gas get to the bottom of your loop.  Holding your loop, drop the free end low to the ground to “pour” out your pilfered gas!  Congratulations, you are now a petty thief.  And, if I may add, I think you’ve chosen a poor field of thieving to focus on.  What’d you get there, maybe five gallons?  I mean, if you got much more you’d have a hard time carting it around, all sloshy and heavy.  So you saved $15 and now you have to carry a five gallon container back to your lair.

Doesn’t seem worth it.  Like those dudes who break into traffic light control boxes to rip out 300 wires for the copper  I bet the copper is a better take.  It’s also a pretty jerk crime.  One of my employees who got siphoned ended up with $600 worth of damage, everyone else just leaves work to find their car on empty.  I guess all crimes are kinda jerk crimes, except maybe jaywalking… that seems pretty innocent.  Illegal u-turns when it’s safe, that sort of thing.  But anyway…

Stealing gas seems to be admitting your stretched pretty thin, nothing better to do, maybe bored or something.  Maybe it’s kids.

I don’t know where I’m going with this.  Goodnight.