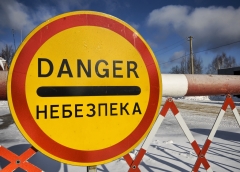 I spent all weekend cooking in my own skin.

Last night I woke so cold (that deceptive, you know it’s not real, cold of a fever) that I stumbled into the living room in the dark to grab another blanket to cover with.  As I shivered my way back to sleep I stuck the digital thermometer in my ear for a few seconds.  It beeped and I hit a button on my cellphone to get enough light to read by (why, digital thermometer people, would you not backlight the temperature readout?): 102.1°, it said.

Reluctantly, I arose again to pop another couple Tylenol.  At the same time I swallowed a Sudafed, already knowing it wouldn’t, like the others I’d popped before it hadn’t, do a dang thing to diminish the tight ball of pressure in my head – the stuffy pain that I could will to one side of my face or the other by putting that side into the pillow.  I don’t know why that muck is so hard to get out, when it seems to be beating against my cheekbones and eyes all day to do just that.

I thought maybe be tonight I’d be on the mend.  But no, I’m still fevered.  Not running as high as the previous days, but I’m still dosing with a steady regimen to keep the numbers in check.  It goes in cycles, and every few hours I’ll break out in a warm sweat and feel so much better for about sixty minutes.  Much past that, though, and the heat returns to my skin and I get a bone-tiredness that takes me back to the couch or the bed to wait out another cycle.

I know how I got sick; it was that weirdo lady on the plane.  So strange with her two kids, one of them named Sophia who was two-and-something years old yet wouldn’t stop fondling for her mom’s breast and crying.  “As you can see, I’ve not quite weaned her yet,” she said.  Hey, nothing a whit strange by world standards… I suppose – but that wasn’t what made you so odd.  Anyway, you told me as we were parting ways in the terminal: “I’d shake your hand but I’ve got a nasty cold.”  And then there you and your family were, in 29A, 29B, and 29C.  And us, occupying 28D, 28E, and 28F, we must have been well within the zone of communicability.  Oh I know it was you, weird red-headed lady… but I don’t blame you… you got it from someone too.

Luckily, most of the others in the house seem to have recovered.  It’s just me sticking it out.  I’ve all but decided to call in sick tomorrow, but am stubbornly “playing it by ear” until the alarm bell rings.