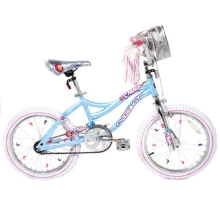 It’s 10pm and I should have been in bed an hour ago.  As soon as I got home from work I started whining about how tired I was.  Carryover tired from yesterday, thanks owed to our our late-night (early morning?) arrival from Florida.  I am not reasonable, however, and did not shoot for a 9pm or maybe even 10pm turn-in.  Nay, I’ll catch-up overnight.

For Christmas Santa brought Keaton a “big girl” bike.  This thing is a clear graduation from the Shiner-sized bicycles she’s had as a toddler.  Her previous bike was quite nice, but in truth she’d outgrown it a year or so ago.  She was still able to peddle around on it, however, and still enjoyed it, so we didn’t have much motivation to upgrade.  Just before the weather started turning rainy and foggy and cooler, though, I noticed her trying to actually use that under-sized thing more and more – and that called my attention to just how much she’d outgrown it.  I told Sharaun: A “big girl” bike from Santa for Christmas.

We ordered it off the web, custom welded by some Chinese kid in an alley (Wal Mart won’t pay for real safety lenses so the kid has cheesecloth tied around his forehead and covering his eyes).  Had it delivered to our dear friend’s house, and before we left for Florida I went over and assembled the thing.  Then, after we’d left, she brought it over to our place, set it out all fancy-like under the tree (or, in front of the tree, more rightly), and took a picture for us which she then sent to my phone.  On Christmas morning in Florida Sharaun asked me, while Keaton opened gifts, “Hey David, can you check my mail for me?”  I pulled out my phone, called-up the picture, and announced that Sharaun had no mail but that Keaton got one from Santa.  We showed her the picture and I “read” Santa’s mail saying he’d brought the bike to California by mistake, but that it’d be there waiting when she returned.

And now I can’t wait to get her on it.  Being that it’s a real big girl bike it didn’t come with training wheels.  I’d initially told Keaton we’d have to wait to try riding it until we could get a pair that fit, but she announced, of her own accord, that she didn’t even need them.  She’s wrong, of course, but I’m going to go ahead try to break her in Navy Seals style and just keep my hands on the bike as we do the first few lessons in the cul-de-sac.  Who knows, maybe she’ll be a natural (I seem to remember me taking off like a boss the first time I rode sans side-wheels, but that could be me remembering wrong) and she’ll take off and pop a hands-free wheelie.  That would be cool.

If the weather cooperates I’ll have Sharaun video the lessons this weekend and maybe have a video up next week.  Should make for good daddy/daughter stuff, and I eat that stuff up.