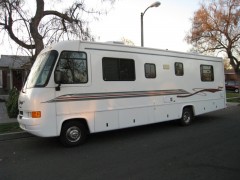 Spent the morning working.  Well, I say that… but in reality I probably spent about two hours working and another two hours playing around with the details for the coming of our planned RV odyssey.

I’m glad I did.  I always plan in a series of refining steps, like some alchemist who decants, decants, and decants some more in search of the Philosopher’s Stone – a perfect itinerary.  Today my re-plan, my second-layer planning, led to a couple revelations: #1, I don’t have to burn any vacation like I’d thought – I can take six weeks of pure “paid family leave” and be just fine; #2, Even my second itinerary, which I intended to slow-down the aggressiveness of my first try, was yet still too aggressive.  In re-evaluating things, I started from basics – asking myself how many “zero-mile” days made sense per week of driving.  In other words, what’s the ideal driving vs. not-driving ratio for a “leisurely” RV jaunt?

I Google’d, asked friends and family, and in the end decided that a 40/60 driving/not-driving ratio is ideal – with an even 50/50 split being as miles-heavy as we’d be willing to go.  Coming to this realization meant we had to do some tweaking to the route, taking out the southernmost Key West and the northernmost Glacier National Park spurs.  With the route streamlined to around 7,500 miles we were able to hit near the 50% ratio.  We still plan to hit most all of the same landmarks we’d planned on, as well as visit with family and friends, so the plan didn’t suffer too greatly.

We also got a chance to do some more thinking on the type of RV we want to rent, and get a better idea of cost for the ~30ft Class A vehicle.  Yeah, it’s all in the master spreadsheet.  I also found an hour this past week to register a new domain where we’ll host Keaton’s roadtrip video diaries.  It’s just a  bunch of test entries in an unfinished theme right now, but it’ll do nicely I think.

It’s kind of silly to stop for a minute and think about how excited I am for this trip (which, I might note, is just an ambitious “plan” until we put some money down – which will chart our course more deterministically).  Being that it’s five some months away and, as mentioned, solely on paper at the moment.  But… I think it’s the realization that I’m bound and determined here… it’s going to happen… we’ll make it happen.  That kind of stuff.  And, for reals y’all, the anticipation is high already.

Until tomorrow, when I wake up back in California – see ya.