Good Monday to ya, online friends.  Hope your Easter weekend was relaxing and whatnot; ours was.

For her birthday Keaton got a “toddler cookbook” from friends.  It has a small selection of fun recipes which kids can help with.  Since she and I have a history of enjoying cooking and baking together, we’ve been anxious to try it out.  So on Saturday morning we paged through looking for something to cook for Sharaun that evening.  We settled on cheesy bread rolls, which we’d serve as an appetizer, and chicken satay skewers, which would be our entree.  We told mom we’d be cooking dinner and even made up a fancy menu and lavishly set the table.  We went on a shopping trip together for a few ingredients we were short on, and then we set about cooking.

Even though it’s a toddler cookbook, the recipes are fairly demanding in time and prep.  I actually liked it, because Keaton got an idea of how much time can go into creating something yummy.  We did the biscuits from scratch, kneading and rolling the dough by hand and then leaving the rolls to proof while we worked on the chicken.  She learned to how juice a lime, grate ginger, dredge chicken, and even stir a sauce while simmering.  She also learned that the cheesy bread roll sheet is hot when it comes out of the oven, and you get burned if you touch it (a good lesson, despite of, or maybe in owed to, the pain).  Anyway, it was a truly fun thing to do together and, as much as dad’s opinion counts, the cookbook was far and away her best birthday gift.

If your eyes work and you feel like it, you can check out some pictures of the fine dining and prepwork just below.  Despite  her apparent absence, Sharaun was indeed the guest of honor and was there… she somehow just managed to stay out of any photographic evidence. 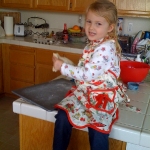 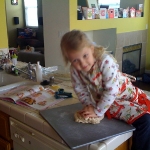 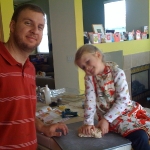 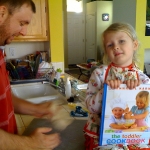 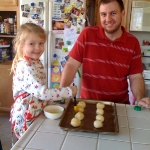 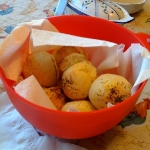 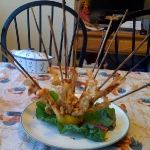 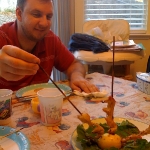 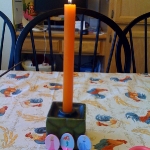 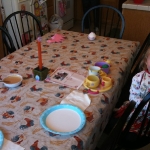 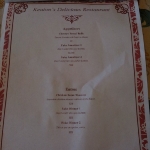 OK let us move along.

Ever since I told Sharaun that Black Eyed Peas tickets weren’t in the budget this month, she’s been on a quest to win them from the radio.  Her track record here is quite good, so I was pretty sure she’d actually end up scoring them.  She called all day long all week long, and I suffered an entire Saturday listening over and over and over again to same stinking seven songs that the stupid radio has in heavy rotation while she tried and tried again.  She even enlisted me to help, and I’d dial and hangup and dial and hangup and dial and hangup right alongside her when she’d hear the cue to call.  In the end, though, around 11:30pm that day, she (of course) did win the tickets.  I half wish the lottery did call-in shows; I’m reasonably confident she could win us millions if they only gave it away over the phone…

Check out her winning moment below:

When she decides she’s going to win, she wins.
(direct link for those on mobile devices without Flash)

I really should start keeping an index of things that are given away this way… and have her start doing it more strategically… I think we’d have to start claiming winnings on our taxes.