Sunday night and I’ve got the place all to myself so the music is loud and I’m on the couch in my boxers.

After four days with just Keaton and I, I dropped her off at a friend’s place this evening for a slumber-party and all-day hang-out tomorrow.  I’ve got an all-day meeting at work with an after-work dinner get-together in the evening.  Not only are our friends watching Keaton all day (and Sunday night) but they’re picking Sharaun up at the airport too.  Sure nice of them.  And me, I’m feeling lonely.  I miss my little girl.

Spending a few all-day days with her was quite an experience, and gave me a good bit off appreciation for just how tiring it can be and how little time there is to “get things done” in between (without feeling guilty for completely ignoring her whilst doing so).  I’ve done the Mr. Mom thing before and I’ve always liked it, but each time I do I feel a little worse for harping on Sharaun over days-undone laundry.  It’s OK though, I’m a male and I forget fast.  Soon again I’ll be calling my work “work” and her “work” “work” (italics/quotes for snide).

Since Saturday was Keaton’s fourth birthday and Sharaun wasn’t going to be able to be here I wanted to make sure she had a good day.  I asked her Friday what she wanted to do and she said she wanted to make a “princess cake” and maybe see her friends.  So Saturday after taking her to dance class I told her we were going to stop by the store to pick up the things we’d need for our cake.  “No dad,” she said, “I don’t want to go to the store.  Let’s make the cake with stuff at home.”  Not sure we had enough “stuff” at home to make a cake (having never made a cake from “scratch” before), I decided to risk it.

Once home I did some internetting and found decent-looking recipes for both yellow cake (not the kind Iran is making) and butter cream frosting.  I did a quick ingredient tally and found we were setup right to make it happen, and then we dug in.  Previously on Friday I’d asked her what kind of “princess cake” she’d want and she mentioned a castle and some jewels and the color pink (go figure) and that she really wanted to somehow integrate her Polly Pocket Ariel doll.  I had the idea to make a tiered round “princess dress” cake and shove the little plastic doll into the top (the whole thing becoming her dress).  Instead of making one large sheet cake I did two rounds and a single cupcake.

In the end everything tasted fantastic and the only real “failure” was that I got gunshy on the sheer amount of powdered sugar that was supposed to go into the frosting (it seemed so sweet already).  It ended up too runny and more like icing, but it was still pink and yummy so I don’t think Keaton cared (plus she got to smear it on so she loved that).  We shared some pieces Saturday and Sunday and are trying to save a little for Sharaun, dried-out as it may be, for when she gets back tonight.  Anyway, check out the fun in the pictoral recap below: 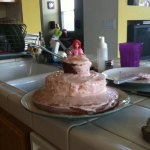 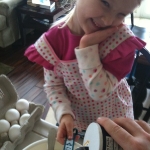 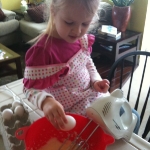 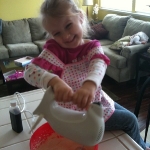 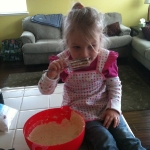 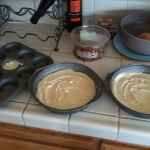 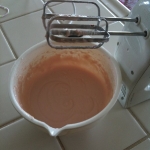 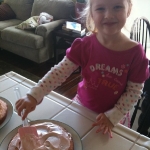 I have to stop this habit of only taking photos with my cellphone anymore.  The quality is so obviously crap but it’s just so convenient when it’s always in your pocket.  Maybe the next iPhone will ugrade the optics and resolution enough that they’ll be more passable.  Not sure I’ll ever get “good” pictures out of a cellphone, though.

Anyway, we had a lot of fun making cake, coloring, working on puzzles, dancing, watching Scooby Doo, cooking & eating spaghetti, and doing all manner of other adult-tiring things.  Kudos to my wife for doing that every day.  It’s fun, but it’s not all fun and it’s a lot of work.

3 Replies to “birthday from scratch”