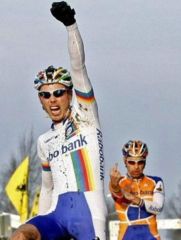 Greetings, year of our Lord two-thousand and ten.  Greetings indeed.

Tell you what, you let the passing of the 00s help ease the memories of the worst of the mistakes made therein and I promise to make less in the 10s, OK?  Deal.

Wednesday Keaton and mom were playing Memory.  Remember that game?  Little tiles with pictures on them, always in matching pairs, that you flip over and then hunt through looking for matches?  Of course, Keaton’s set the Disney® Princess™ version; need you even ask?  First game went to Sharaun and Keaton was not happy.  Her reaction was unlike anything I’ve seen from her before.  She got immediately frustrated.  She denied her mother’s win loudly, started grabbing for Sharaun’s pile of matches.  She then tried to deny her defeat.  “We weren’t even playing for a winner!,” she declared.  “I didn’t lose because there is no winner!  We weren’t playing it like a game!  We were just playing it!”  At that she stomped off back to her room and slammed the door.  Odd, irrational, and seemingly unprovoked.  She stayed back there pouting while Sharaun and I looked at each other, considering.

Yes, I’d never previously seen this behavior from our little angel.  I have, mind you, seen it before though.  From me.

And so I said silently to myself, “Lord… please help us teach Keaton patience and sportsmanship.  Please help her to best the me in her in this regard.”

While my folks were here they recommended a book called The Road to me, said they thought I’d dig it.  I bought it, and read it through, on Tuesday.  Powerful book; hard to put down and as such a quick read.  Well written and came nicely to life inside my head.  Apparently there’s a movie now.  After my birthday, I told myself that I needed to shake this fantasy-only book kick I’ve been on since… oh, I don’t know… twenty years gone now…

See, I got the latest novel in the Wheel of Time series for my birthday.  You know, the massive fantasy series I’ve been reading, off and on, since college?  Yeah – that long.  I’ve re-read the series once in its entirety to catch up when a new book is released… but at 10,000+ pages it’s more than a quick effort as a refresher. I devoured it, feeling accomplished at finally coming to the end while there are yet books to be published.

See, this last one was supposed to be the final book, was supposed to end it all.  But the author died before he could bring it to a close.  His wife, who’s also his editor, asked a young fantasy writer at the same publisher to take up her late husband’s extensive and detailed notes and finished his unfinished masterpiece.  Only, the new guy, upon seeing the original authors final story arc, deemed it impossible to fit into a single volume and so now we have three final volumes, spread over three years.  So, even though I thought I’d be done, turns out I’m still only through twelve volumes of an eventual fourteen… and have at least another two years to wait.

In the meantime though, I have to diversify my reading material more than I have in the past years (thanks Ham On Rye, Vonnegut, and On the Road).