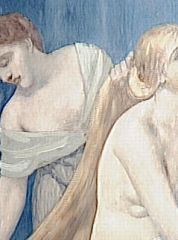 Happy Tuesday friends.  Hope your Christmas was good.  Ours was great.

Now I’m going to jump into some blog.

There are two well-defined moments in each day where Sharaun and I have come to expect maximum bad behavior from Keaton.  One in the morning when it’s time to brush her hair, and one at night when it’s time for bed.  While her reactions aren’t 100% predictable, I’d estimate she explodes into an irrational fit at these events about 80% of the time.  And folks, 80% of the time is just too often.

I think it’s probably worst when it’s time to brush her hair.  Likely because, when that time comes around, it’s usually right before we’re about to walk out the door to be somewhere we’re expected to be.  To Keaton, having her hair brushed is akin to torture.  At first she balks: running, hiding, dodging.  Once you finally corral her and begin brushing she enters the protest phase: squirming, ducking, shifting on her feet, anything to get out of the way.  When you’ve had enough of this and you demand she remain still so you can continue, she enters the ridiculous phase: screaming, crying, whining, and generally fighting you as you try to gently rake out the tangles.  I mean, her hair isn’t even that bad… it stays fairly de-tangled and we had it trimmed recently to help with the dry ratty ends.  It’s just something she’s opposed to.  I’ll be glad, though, when this “phase” (it’s a phase, right?) is done and gone with and she can brush her own her without intervention or argument.

Bedtime is sometimes as bad, but usually more tolerable as we aren’t pressed for time.  Here, the first phase of protest is the classic kids tactic of bargaining for more awake time.  Once she’s warned bedtime is nigh, and is asked to start the readying process (clean-up, teeth brushed, potty, jammies), she starts negotiating.  “Daaaaddd… can I just have three more minutes, pleeeaase?”  We set audible timers on the iPhone as a way to reinforce the time warnings and keep her from delaying, and those seem to help… but once the time is upon us and it’s go-time, she escalates.  Knowing she’s got to do her routine, she instead shifts strategy and moves to delaying tactics.  This can be the “thousand-year brush” style of teeth-brushing,the “slow-motion potty,” or the “inch-a-minute” style of walking from one place to another.  Quite crafty, that child.  After being called out on delays, we move to a similar endgame as the hairbrushing fiascoes: all-out panic and fighting.

In general, bedtime usually doesn’t get to that last phase… but hairbrushing… oh man hairbrushing.