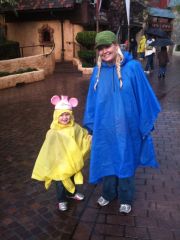 Hi internet friends. Hope you had a good weekend, mine was a mixed bag.

I mean, how can a trip to Disneyland be bad, right?  Well, it can’t, really… but it can be… challenged.

First off, it rained.  Just a little on Friday, but more on Saturday.  And, since Saturday was my “get in free on your birthday” day, that was kind of a bummer.  Ultimately, though, the rain didn’t bring us down nearly as much as I’d have guessed.  The whole crew had ponchos and rain gear and we were relatively well outfitted for inclement weather.  Besides, the rain kept the throngs away from the park, so the lines were nearly non-existent and we were able to walk on almost everything.

Second, sometime around noon on Saturday (my birthday) I started to feel pretty run-down.  Things took a turn for the worse while we rode the jungle cruise and I battled hard to keep the cold pizza I had for breakfast from making a curtain call.  After that it was only a few more short hours of walking around in the rain feeling nauseous before I called it quits and headed back to the hotel to get some rest.

In the end it didn’t work out too bad, though, as the rain really started coming down in the later afternoon and forced our whole party back to the room to join me in my quarantine.  So, our two-day trip got cut short by half a day, but I don’t think any of us was wont for a good time.  Proof that not even rain or liquid poo or upchuck can hamper a trip to the magical Disneyland.  That place cures (almost) all that ails ya.

In other news, Sharaun is fast coming to dislike the brand new hardwood floors she wanted for so long. And, with each disparaging remark about how easily they dent and scratch I feel more and more dumb for dropping so much money on them. I know she’s not complaining to make me feel bad, but when she does, I do. In her most recent fit of floor-dent panic, I find myself arguing against a completely ridiculous “Keaton can’t play on them” rule. Guess we should’ve got the cheaper laminate or maybe just upgraded the carpet…  I’m still working on convincing her that these minor surface marks should be seen as “character” and are something near unavoidable, but, as yet, she’s just not buying it.  Oh, she will, as the stuff is glued down and not likely to go anywhere anytime soon.  She’ll come around folks, I swear…

In other other news, if you’re a Facebook denizen (as most of you I’m assuming are) you may have seen that Sharaun trumped me at getting an announcement into cyberspace: We’re scheduled to have baby #2 sometime in early July next year.  We are indescribably excited about this, and I’m feeling somewhat personally vindicated after the brief concerns over the working-ness of my junk.  My plan, being that I plan disseminating news like this around the internet, was to announce the good news here on sounds familiar by simply posting the video of us telling Keaton she’s going to have a new baby brother/sister.  And, now that the world knows, we’re planning on doing that today – so if I’m quick with the editing you may see that tomorrow.  For now, here’s a screeny of Sharaun’s Facebook announcement… since she beat me to the punch:

OK I think that’s enough for today.  Took the car to the body shop this morning, maybe I’ll have an update on the damage by tomorrow.

2 Replies to “beaten to the punch”