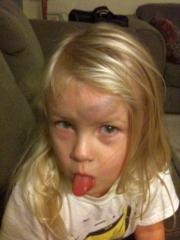 A week ago Tuesday, the week before we left for Florida, which is where we are now, I was on a phone meeting with an employee of mine around 5pm.  As we were wrapping up, with another ten minutes or so remaining in our conversation, Sharaun called my cellphone.  I didn’t answer.  About 50% of the time, when I’m working that is, I don’t.  Usually, she’ll just leave a message or send a quick text, assuming I’m occupied and can’t get to the phone.  This time, however, she rang my desk number immediately after.  When I didn’t a answer that, the cellphone again.  Curious, I politely put my call on hold and answered.

“Keaton hit her head really hard on the table and the size of the bump really has me worried,” she said.  “OK,” I replied, “Was she unconscious?  Did she get sick?  Is she acting funny?”  With a round of “Nope”s in reply, I told her I’d go ahead and get off the phone right away and come home just to check, but it sounded OK to me.

When I got home I was greeted with a seemingly normal daughter, all but for the humongous bruised and swollen lump over her left eye.  Sharaun was helping her ice it when I got there, and a friend who’d stopped by just minuted before I arrived had already given it his best dad’s inspection and “all’s well” report.  I took a look myself, poking it a bit and asking her how she felt (you know, the real scientific kind of diagnosis-stuff I learned in computer engineering school).  After talking to her and prodding her I myself was convinced she just had one heck of a bump (or “hematoma,” as Trapper John taught me). And folks… it was indeed a large  bump… as the picture above somewhat indicates (bad light plus iPhone doesn’t make for superlative photography).

Anyway, as the week wore on, and we got closer to coming back to Florida to see family and friends we’ve not seen in year, the blood in that bump drained down into little Keaton’s face.  First, the bridge of her nose appeared swollen; next, small black circles at the corner of her eyes.  By Saturday, however, when we flew across the country, she had two fully-developed shiners.  We got some looks in the airport, and one flight attendant even stooped to whisper, “I couldn’t help but notice your daughter’s eyes, are they just naturally dark like that?”  “No,” I replied, “She took a header into a table.”

Oh well… part of growing up I suppose.  I’ll spend the last few evenings before we leave GIMP’ing out the black eyes from all the Thanksgiving photos for family, no biggie.

Maybe later this week I’ll write a bit about being in Florida.  In brief though: It’s good to be back and the place feels the same.