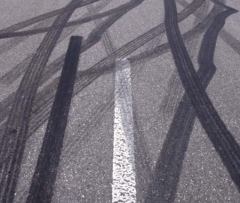 When I was a kid, I used to hold my poo.

I thought of a bunch of different ways to start this entry… but that one above ended up winning out.  Simple, true, and gets right to the point.  But, to flesh out the statement with a little more info, let me expound.  ‘Round about the age of seven or so, and right through to the age of, oh, I don’t know, maybe as old as ten, I valued my no-pooping activity much more than the time that actually pooping stole from it.  What I mean is, instead of stopping what I was doing and going inside to use the toilet when nature told me to, I’d “hold it.”

This holding it amounted to, and I know, this is going to be funny, stopping what I was doing (yes), sitting down on the ground with my legs tucked underneath me, and physically holding in the bowel movement.  If I remember correctly, physiologically this meant I was going through the biological motions yet just not allowing my efforts to, ahh, bear fruit.  What I mean here, put a bit more coarsely, is that I would be sitting there and bearing down, but using my legs and feet to prevent anything from really happening.

I know this is disgusting, but I promise I’m telling you for a reason (if “setting up a blog” is a “reason” these days).  “Disgusting” would be word enough for just forcibly holding in poo, but I know that, certainly, this practice had to have some additional impact.  I mean, shunting your poo into a clenched and stopped-up bum can’t be a nice tidy way to delay a bowel movement.  I assume my underwear bore the brunt of this practice.  Thinking back, I can remember my mom complaining about my less-than-clean drawers.  To be clear, I wasn’t “having accidents” or anything… I just think I was leaving a bit more… residual… than a normal youngster might.  In the middle school locker room, we used to give guys with “skidmarks” a hard time – I imagine that my drawers during this time may have made good targets (I’d given up the practice long before middle school).

So why am I telling you this?  Well, because… the other day, in the middle of getting frustrated with Keaton for not wanting to go sit on the potty, I caught myself wondering, “What’s the deal with not wanting to go to the bathroom?  Why is this so hard?”  And then… as I was on about my third, “No, it doesn’t matter if you don’t want to, you’re going to try and use the potty before we leave!,” I remembered my old days of poo-holding.  How I never wanted to leave my friends or stop what I was doing to take a potty timeout; how I could get by with just a couple seconds sitting on the ground instead, and it all made sense.  Karma.  I’m being punished by the Wheel.

I still made her use the potty before we left, though.  She went, too.  Go figure.