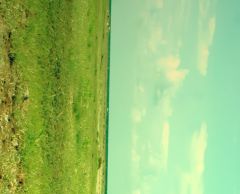 The weekends are never long enough; this one was no exception.  Despite being jam-packed with activity, it still managed to feel too short by half.

The weather cooled off significantly Sunday, so much so that, after church, I opened the house wide to get the fresh air in.  After reneging on what would’ve been my second kids’ birthday party of the weekend, Sharaun took Keaton off and left me to the breezy Sunday afternoon.  After a nice sandwich, I settled down on the couch for a long nap while the iPod provided background.  But, that’s not why I started this paragraph.  In fact, I wrote it to talk about the weather and how it’s turning (which isn’t really happening yet, but today’s cooling got the ball rolling) gets my brain turning to the Fall.  My favorite season; Fall.

This morning Sharaun called from Ross, “Hey,” she said, “They have this big animatronic witch here, she stirs a smoking cauldron and you can speak through her with a wireless microphone.  It looks pretty cool and expensive, but they have it on sale for $60.”  I was vaguely interested, but having not seen the prop myself not quite enough to recommend a $60 purchase.  Then, later that day, after checking the mail, a Halloween costume catalog arrived.  In the catalog Sharaun found the very same witch she’d seen earlier at Ross, but retailing for $230.  Being able to see the thing in the catalog, I realized it’s actually pretty dang cool, and that $60 is a pretty hefty discount from a $230 pricetag.  So, after dinner we stopped by Ross and picked her up.  Could be an easy “gimme” prop for the year… but I still think I’m going to try and build something.  Buying props already…

Ahhh… who am I kidding.  I’ve got nothing more to write.  Good weekend, busy week, same old stuff.