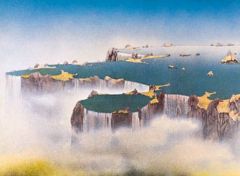 Two entries on the week.  That’s not so good.

Sitting here listening to Yes’ Close to the Edge, one of those albums that’s about as close to a perfect album as there’ll likely ever be. Up there with Dark Side of the Moon and other luminaries, it just never gets old or ceases to be fascinating in every little note, downbeat, or Anderson-dominated harmony. If you don’t have this album, your collection is sorely lacking. Maybe one day I’ll put together a list of my top-ten “essential” albums or something; that would be totally fun and interesting… for me only. Moving on.

Today I got hit by a mini-wave of morning-time malaise… something that I’m unaccustomed to as I’m usually quite the morning person. I went through my well-rehearsed routine: Waking; heading to the water closet to evacuate and read, in order, CNN, MSNBC, the local California paper, and paper local to where we grew up in Florida; saying a small prayer of thanks for the things I have, a smaller one asking forgiveness for some of the more ridiculous things I’ve done to put those things in jeopardy, and another one as a catchall for all those among humankind who hurt and have needs (with age, these prayers, you see, don’t seem like just so much soliloquy to me anymore); stripping for the shower; dressing post-cleansing; and heading out the door after kisses for Sharaun and Keaton.

At some point in this daily dance I was struck by a gloomy thought: This is what I always do, and this is what I’ll be doing for a long time to come. Really, it shouldn’t be a gloomy thought… but this morning it seemed that way. While I consider myself far from a person prone to depression, for a flash there today I felt a little “locked-in.”  But, the moment passed almost as quickly as it alighted, and (almost) all was right with the world again.

And now I sit here in the evening, like so many other evenings, perched above the keyboard of this machine again.  I changed the music; Close to the Edge played through nearly three times and it was time to shuffle.  Playing a nice Emitt Rhodes track now, pleasant, sounds right.

Well guys, after that… time to talk Halloween.  I’ve been becoming more and more aware that I’m actually a little late getting started on my annual prop project.  I’ve already decided what I’m making this year, and even have the a parts list; I’ve just not started cobbling it all together.  Moreover, I’ve actually been a bit on the fence this year about doing our annual party.  I do this every year though; start thinking we’re too old to throw such a raucous bash, start thinking it might be nice just to decorate the house as usual and save the Halloween fun for trick-or-treating with Keaton instead of having a houseful of drunk folks.  But… in the end, upon sharing my reservations with Sharaun, she always manages to convince me to go ahead with the status quo (she’s nearly done it again this year as well…).

Before I go, I figured I’d link-drop the P4K’s recently finished weeklong feature, “The Top 500 Songs of the 2000s.”  I’ve been enjoying the list immensely; and while I don’t always agree with it (who could, at 500 tracks strong and Pitchfork’s love for freak-folk and electro-dance), I do heartily support some of the choices.  For instance, while I’d liked to have seen Amerie’s “One Thing” crest higher on the list (I love that song so hard), I do agree that Beyoncé’s “Crazy In Love” is definitely in the right sitting atop it (if you wonder why I chose those two to compare, just give each on a listen and you’ll get it).  And, as for the #1 pick… I was surprised.  Interesting, in that Sharaun has always loved that track, even more than I did (or ever have) upon first hearing it waaay back when.  I always knew she had pretty decent taste in music.  No wonder I married her.