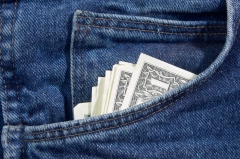 What a crappy Monday.

I picked up the bug or whatever it was that Sharaun was kicking around on Friday.  While not debilitating by a long-shot, it’s certainly annoying.  Seemingly centered in my sinuses and making my head throb and ache and dizzy.  Anyway, it’s not got me down and out… just more like down.  Boo.

I’ma tell a story now.  It’s kinda good.  You should read it.

Sharaun had to teach a class at our church’s Sunday morning “second service” this weekend, which left Keaton and I alone while she stayed at the building. Since she’d secured a ride home, we took off with designs on a lunch together at home after a brief stopover at the local big-box store to get some $15 jeans and shorts for me. With the recent weight loss, nothing I own fits to my satisfaction anymore, and the el-cheapo duds that the warehouse stores sell for pennies are just right to fill out the empty closet and drawers.

While rooting through the tableful of denim I spotted a pair that looked good and advertised my current dimensions. I picked them up and unfurled the length of them so I could see how long they were (my #1 gripe about mens jeans is that they are too long and look all bell-bottomy at the end; call my unfashionable but I actually prefer a somewhat tapered leg that doesn’t bunch up in balloons of fabric around my ankles). As I let them hang, I heard another customer say to me, “Woah, you dropped something there.” And, looking down, sure enough, at my feet was a sprinkling of bills… cash… money… dosh.

Befuddled, I looked at the man who’d alerted me to the greens. I looked back to the jeans. I looked to my own pocket, where I knew my cash was safe and secure inside my wallet. I looked around. Finally I replied, somewhat confused, “I… I think that came out of these jeans…” “No way,” the other guy responded. His daughter then piped up, “Oh yeah,” she said, pointing at the jeans still dangling from my hands, “Look!” And there, peeking from the right front pocket, was more cash.

Flabbergasted, I simply grabbed the money out of the pocket as the other guy bent down and collected the spilt cash on the ground. We laid it all out atop the pile of jeans on the table and did a quick count: a little more than sixty dollars. I must have made some comment about not knowing what to do with it, because the guy replied, “There’s not much you can do; it’s fair if you take it, they’ll never find who it belonged to.” Not needing a ton of convincing to begin with, I agreed. In return for him spotting the stuff, I offered to split the findings – he declined, but, when pressed to take at least a third or something, acquiesced and allowed me to give his daughter five bucks.

So, I left the store sixty dollars up from when I walked in. Pretty crazy.