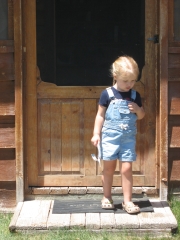 Hey internet.  You have a good weekend?  Man, did we… did we ever.

Back from an all-American Independence Day weekend nestled in a high desert valley between rocky spurs of the Sierra Nevadas.   We went, for the third time now, to a little red cabin in the Owens Valley, set in what used to be a volcano ringed by the tallest granite peaks in this fair land.  The location is truly otherworldly… drenched and dripping with California history.

While there, I took time to note again how the nature of our “getaway” weekends has changed.  Nowadays, it’s nearly all about “the kids.”  Not that we have a plurality, not yet at least, but the ‘s’ is owed to the collective kids of the group.  And this time around, it seemed like “the kids” were in clover (or, at least, I sure was watching them enjoy themselves in such a pastoral setting).  I mean, seriously, there were scenes from this trip that played out like little movies in my head:

Sitting in camp chairs on the tarmac of the local airport, the place jammed with cars all lined up to watch the fireworks come dark.  One huge tailgate party in the hot, hot Sierra sun – everyone barbecuing, consuming fermented drink, and laughing.  In the dusk hour before the sun made its retreat behind the mountains, the place turned into a do-it-yourself alley of fireworks.  We positioned the kids’ mini camp chairs to watch the action and their faces lit up with each  multicolored fountain of sparks and fire.  They jumped and danced and clapped and sang “happy birthday” to America.

Standing in the long grass alongside a rushing stream, the breeze swelling and dying in fits as I tried for the first time in my life to fly cast.  I flicked the line back in a huge ‘s’ behind my head, using way too much wrist action and not keeping my arm movement as limited as I should.  Technique be damned, I brought the lure forward and slingshot it across the river and into the current on the far side.  Watching the line catch the flow and slide down and across the river as it rose in supposed temptation to supposed fish… for a few seconds, it was nirvana.

Watching Keaton fly a butterfly-shaped kite in the wind in front of the cabin.  Her neck cocked back so she could watch the yellow streamers trail out behind the thing, she’d walk backwards and pull the string to get it to move higher into the sky.

Yeah boy, what a weekend… thanks to King George for trying to govern us without any local representation, and to those early settlers for objecting to it.  My family and I salute you, and ate some watermelon and burgers in your honor.