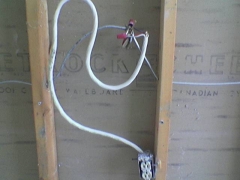 Is it only Monday?  How the… seriously?  Because it feels like it should be a Thursday right now, for real.  Lord a’mighy; land a’Goshen…

It’s beginning to heat up in California.  A few weeks ago, on another hot day for early Spring, Sharaun called me at work and said that the air conditioning wasn’t coming on.  Now, usually, when she calls with these kinds of “problems,” I shrug them off and recommend a few troubleshooting tips.  “Did you check the settings?,” I asked.  She had.  “Is it on ‘auto’ and in the ‘cool’ position?”  It was.  OK, so, the easy stuff down… I pointed her to the fusebox outside.  She checked, nothing amiss.

With no fuses tripped, I realized I’d pretty much walked through the extent of my AC debugging skills right over the phone, and, instead of the usual, “I’ll take a look when I get home,” I said something like, “Well, the AC is one of our most important appliances, you should go ahead and look up who to call and get a guy out there to look at it.”  As I hung up I had daymares about what might be wrong with the system, from the simple to the complex, and what it might cost to fix.  About five minutes later, however, Sharaun IM’d me to tell me the unit just kicked on.  Whew… maybe just an unusual delay.

And, I forgot about it.

Then, tonight, it did the same thing… right in front of my eyes.  In fact, after mucking around with the thermostat controls on the wall, to my dismay I realized the unit wasn’t even kicking on when I set the fan to the “on” position.  Not even after leaving it that way for a while, either. So, two strikes for the AC… something’s afoot.  Now… here’s why I’m worried.

Several months ago, I got all Bob Vila and decided to install a ceiling fan in the living room.  Shockingly, things went very well and the fan went quickly and easily.  At the time, I was quite proud.  Well, except for one little bit of “finishing:”  I tied the fan’s power into the AC and heating unit’s line in the attic, but I fudged the workbox for the new wiring junction (didn’t leave myself enough slack when cutting and splicing in the new line, a common novice mistake, I’m told).  Not wanting to make two more cuts and splice in a new section of wire that night, I left the spliced section just hanging in the unclosed workbox, and didn’t re-tack the wires to the rafters per code.

And, of course, despite my best intentions, that’s the way the wiring still sits up there today. Now, I have to wonder… is my lazy connection iffy?  Could the limp wires be tugging on the unsecured wire-nutted connection and causing some kind of intermittent power loss to the AC unit?  The fan works consistently, so you’d think not – but still, the timely seeming “failure” of the AC worries me.  Worse, if my connection is dodgy, in addition to being inherently unsafe to begin with, I’m worried it could start a fire.

So, this week it’s into the attic I go to repair the connection properly – giving me some peace of mind and eliminating it as a potential source of failure for the AC.  Wish me luck.

Looks like the “cash for clunkers” plan has been rebranded as the “Car Allowance Rebate System” and even has a fancy new website for the curious.  And, as things get more real every day, I’ve been spending some time thinking about what kind of bumper sticker might look nice on my new Obama-financed vehicle.  Tonight, I did some quick mockups in Inkscape just to get a feel for them.  Imagine us in a new car riding around town with one of these babies stuck to the back:

Not bad, but needs a little color…

Oh yeah, that last one is definitely my favorite.

Oh, and it looks like the administration either finally got around to, or caved to “broken campaign promise” pressure, implementing a national website giving us plebs five days to review any bill passed by Congress before the president signs it into law.  A step in the right “de-mystification” direction, to be sure, although ultimately I question 1) who will care, 2) who is gonna look at the feedback that pours in, and 3) how effective is five days for the public to rally against something anyway.

Well, that’s it for tonight… turned out to be wordy and media-rich.  Who would’ve known.