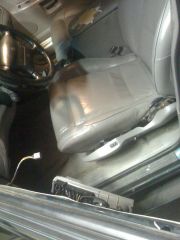 At a managerial bootcamp thing I went to once upon a time, we had a speaker there who’d written a book called The Go Point. The subject of this book was, if I remember correctly – the hangover that morning was a bit persistent – decisive decision making, and when to be decisive whilst making decisions (or some such manager-speak nonsense).

I mention this now because I, my friends, am at a crossroads – and am facing a “go point” of my own.

It’s the Ford; the Ford is dying.

Twelve years old and nine of those spent in the valued service of our family and she’s on her last legs. 160,000 miles and she’s tired; aching even. I can elaborate:

Here’s the quandary:  Provided the Ford doesn’t explode, I think I can fix and maintain her for about $2500 this year. That estimate includes tires, regular maintenance like brakes and oil (done myself), and fixing a few of the things above so that the vehicle is usable (locks, iPod, etc.).  Or, I could trade this “wasted” cost for a monthly payment on a new or used car.  This is my decision, this is where I stand.

Years ago, I tooled our financial plan to provide for an “even trade” in loans: Payoff the college loans and get a new car loan for the Ford’s successor.  Let’s not talk about how frustrating it is to me that we’re still paying off college having graduated some ten years ago – but the plan thus far has been executed to a tee and those should be done and buried by Q4 this year (look at me with the finance-speak).  So, this whole new car thing is about six months too early for the plan.

The plan; and so it goes.

Anyway, over the past month I’ve been running numbers and doing research.  As to the ultimate decision though, I’m still leaning away from a near-term purchase.  I’m lucky in that I have smart friends with whom I can seek counsel.  Some counsel a new car, some counsel a less materialist approach (you know who you are, friends).  I take both inputs to heart and land somewhere in the middle: A deadlock.  Ultimately, however, I shy away from financing anything… financing is the devil to me… I want to buy everything with cash (as unrealistic as that may be, at times).

But, as of tonight I’ve decided that, for now, I’m giving myself a “cooling off” period before doing anything rash.  I’ll fix the door locks on the Ford, hope the duct-tape and string hold for another six months or so, and at the same time continue laying away funds for a downpayment and narrowing down the field of American vehicles I might like to someday drive.  This way I get to pay off the college loans this year, on schedule… and eventually I’ll get to drive something new (or at least new to me).

Watch, tomorrow I’ll be writing about the new car I bought.  Will me luck, OK?  Goodnight.

One Reply to “showing the signs of age”