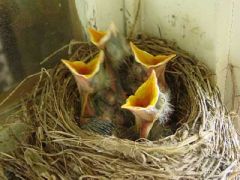 Broke down and did it; don’t hate.

My decision came over the weekend. Full lawn and landscaping, weekly; the all-out rich-guy level of service. I’ve now joined the ranks of the bourgeoisie, compensating a working class for work I’m totally able to do myself – but don’t. The “why” for the “but don’t” is what still bugs me. Laziness, I say. Busyness, some of my friends say (the pro-lawn service bunch). It’s somewhat due to being busy, sure… but maybe being busy being lazy. All comes down to a question of time. How much time do I spend monthly taking care of the yard, and what dollar amount do I feel my time is worth to me. I guess I broke down. Reality now is that I’m just not getting it done, so now I’m paying the price (literally).

As the service starts, and (hopefully) the yard begins to glow, I suppose I’ll be able to either justify the expenditure or not. As it stands now I feel good about it, mainly because I don’t have the guilt over the outstanding work hanging over my head anymore. I try and think about how nice it’ll be to not have to worry about getting the yard in order for a summer BBQ, and that makes me happy. Then I think about how relatively easy (albeit time-consuming) the work is to get done, and how I’m a no-good fatty-American for paying “workers” to do it for me. Sigh… it’s a moral quandary for me, as stupid as that seems. If you’re a friend of mine, make sure to mock me about it… just so I know you love me.

And, playing rich by outsourcing my yardwork got me thinking about money and budgeting on the whole… so I wrote the following.

A month or so ago I mentioned here that I’d cheaped-out and downgraded our satellite TV service to the lower-end “package.” In doing so, I lost some channels I enjoy (namely MSNBC and Fox News, mostly because I like to put them side-by-side using picture-in-picture and hear the 180° out-of-phase opinions of Hannity and Olberman completely cancel each other out), but nothing that was too hard to deal with. Thing is, that only took the bill from around $85 down to about $55. A good savings, to be sure, but $55 a month is hardly what I’d call a “deal” for TV – which is something I don’t want to feel compelled to watch in order to get our “money’s worth.” (See my rant about HDTV from back in me pre-HDTV days).

Anyway, I was complaining to friends the other day about the cost of “things” (more on that later), and someone mentioned that Dish now offers an “HD only” package on the cheap. Once I remembered this later in the week, I ran a check on their website and sure enough they are advertising an HD-only “bronze” package for $30 a month. Add $5 local channels to that, and the “privilege of having a DVR” fee of $6 and you can get out the door for $40 monthly. Sure you lose a few key standard-definition channels (Sharaun lobbied for MTV and VH1, Keaton for Backyardingans on Nickeldeon, and I was a little bummed to lose Comedy Central), but for a $15/month savings I figured we could either get Keaton some Backyardigans DVDs or have her start watching Handy Manny instead (plus, we still have ~60 episodes on the DVR). So, I did it.

Down to $40 a month. And you know what, I still think that’s too much to pay for TV.

In fact, thinking about it, I decided I know about what I want to pay for things – and wondered how close my dream-prices are to other folks’ ideas of what common services should cost. So for kicks, here are some common services that Sharaun and I pay for, and the price I feel like I should be paying to use them – not what we actually pay. This is just what “feels” right in my head for how much these things should cost, no more science behind it than that.  Check this:

Yeah, and that was before I went all wallet-open and got a lawn service.  Seriously though, why should I have to pay more than $30 a month for TV?  I freakin’ shouldn’t.  And cellphone, much more than $40 a month for that seems like a blatant ripoff.  Call me cheap.  Maybe I am.

2 Replies to “call me cheap”