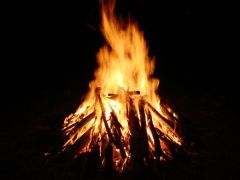 For her birthday, Keaton got a fantastic little kiddie camping set.

All contained in a pink and purple backpack, she got a tent, a sleeping bag, a water bottle, and a flashlight.  She absolutely loves it; is seriously infatuated with it.   Originally I put it in the garage for storage (intending to break it out for some real camping trips later), but all weekend she begged me to set up the tent so she could put her babydolls to sleep in it.   On Monday when I got home from work she dogged me incessantly, lobbying hard for tent-setup in the playroom.  Eventually, I broke down.

I first grabbed an old coffee can from off the top of the fridge and handed it to her.  “C’mon,” I said, “We’ll need this to collect rocks for our fire ring.”  We went outside and walked over to the dry streambed landscaping feature I put in a year or so ago, where we claimed a canful of nice-sized rocks from the pile.  We took them inside and built our little fire ring beside the now assembled tent (with sleeping bag, and Kia, inside).  Thinking the campfire required just a bit too much imagination, I whipped up some fake tinder (rolled up pieces of old grocery sacks) and flames.  For the extra finish I ran an extension cord to an LED nightlight underneath the “sticks.”

Came out pretty good if I don’t say so myself…

So, I’m off to go camping with Keaton and her babydolls.  If you need us we’ll be roasting cottonball marshmallows on the end of chopsticks over our pretend fire, OK?

How’s that for roughing it?