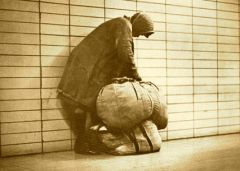 Good because we’re speeding towards the weekend… not so good because I’m quite behind at work.  It’s review time again, and frequent readers know all about my thoughts come annual review.  So, instead of taking my time tonight to finish them… I’m going to write instead.

Have I told you guys that we’ve been having a hard time throwing things away lately?  Yeah, we totally have.

Because Keaton, out of a strong sense of environmental responsibility, or perhaps an inability to “let go,” has become our very own little garbage/not-garbage filter.  Whatever refuse finds itself atop the trash resting in the bin becomes something for her to potentially reclaim. I might have an easier time understanding this were the things she salvages broken toys – but most of the time it’s just trash; garbage plain and simple.

Like the busted umbrella I had tried to tuck under some papers in the garage trash bin, which we passed by on the way into the house the other day.

“Look, there’s my umbrella in the trash!  That’s not trash!”

“That umbrella is broken baby, it doesn’t open right anymore.”

“But, but yes it does!  I need to get my umbrella out of the trash!”

“No, Daddy needs to throw that umbrella away.  We’ll get a better umbrella later, OK?”

I got lucky that time, as we actually had the conversation and I “won.”  Most of the time, things are “rescued” from the garbage without our knowledge.

A cracked piece of tupperware that’s been missing its lid for years will mysteriously appear in the living room full of crayons, despite me having thrown it away in the bin under the sink the day before.  An old white t-shirt of mine with yellow deodorant-encrusted armpits will suddenly adorn one of the dolls, re -purposed as a beautiful “princess gown” and now more important than life itself and thus completely invaluable and unquestionably not trash.  Good luck throwing away Kia’s dress, y’all.

Now, I have thought about the motivation behind this recent phenomenon, learning, I like to think, a little from the whole locked-door/bedtime thing we went through a little ways back that there are often “hidden” drivers behind behaviors.  Maybe, just maybe, this is grown from what we’ve dubbed the “Sunday School junk” thing.

Specifically the fact that, after church on Sundays, Keaton brings home at least one piece of “artwork” or “craft” she’s done in her little classes.  While these have some immediate value as her own creations, and something she and we can be proud of, their appreciation vs. time curve dips near asymptotically as you move right on the X-axis.  And so, by the time the drive home after church is over, they’ve become just a blob of half-scribbled-on construction paper, glitter, cottonballs, and Elmer’s glue.  In other words, what was an hour ago a deeply meaningful “project” is now a prime candidate for the trash: i.e. it’s garbage.

So, we toss it and hope she doesn’t notice.  Oh but she always notices.  Always.

“Hey Daddy!!  That’s my plate-face from church in the trash!!”

So maybe she’s just accustomed to us throwing out her cherished creations, and being wary of our ability to distinguish genius from garbage has decided we might need some assistance figuring out what should stay and what should go.  Or, perhaps her garbage man fascination is simply escalating to the next predictable levels… and we should actually be fostering her trash-sifting abilities.  Or, maybe she just likes garbage.

Whatever the reason, with her assistance we’ve managed to recover many an important and irreplaceable item: One brown shoe from when she was a year old, its partner missing for months; empty bottles which formerly contained water, since she can “take them to the gym” when she “exercises,” and even the three stale Goldfish in the bottom of the months-old box.  She leaves no potential treasure undiscovered… that’s for sure.

Anyway… next time you’re over please don’t mind the broken umbrella in the corner, the playroom cache of empty water bottles, or my stank old undershirt wrapped around Kia.  It’s just our baglady daughter and her “things.”

Should I be doubly concerned that she talks to the cat?

2 Replies to “our resident baglady”