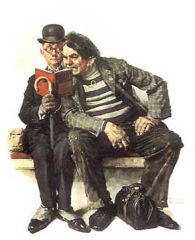 I skipped Monday night writing because Sharaun and I made a joint jaunt to the gym after dinner.  By the time we got back it was time to get Keaton in bed and after that I wasn’t in the mood.  I stared at this screen for a while, but after a few minutes decided to read a little on the chance it’d loosen up my keyboard fingers.  No such luck.

Tonight, on the other hand, we went to the gym early, before dinner, and I’ve got Keaton down now and feel quite like banging keys on the laptop.  Maybe I’ll at least get a couple respectable paragraphs.

The new Malajube record leaked today (if you don’t care for albums sung in your non-native tongue, and you’re not French, than this isn’t for you).  I had loved their last record so hard that I’ve been waiting for this follow-up with a good bit of anticipation.  And, I gotta say, after a casual listen while cleaning up dishes from our pork chop and rice dinner, I’m worried.  Seems like I don’t hear that bouncing energy of that last LP.  Where’d it go Malajube?  Where’d it go?!  Maybe I need to listen more.

Today was a good day for instant messaging, and there were a couple exchanges I thought were comical enough to post.  First, a friend IMs me asking a question similar to those I get rather often:

Her: “Hey, I want to watch the ‘Sex and the City’ movie, where can I download it?”

Ah, a casual need-driven pirate… the worst kind to instruct.  Since using a real tracker is out of the question, I opt for the masses-friendly route and suggest The Pirate Bay.

Begins pasting in random TPB links asking if that version is the best.  I surf to TPB, find the aXXo rip, and paste in the URL.

Her: “How do you know this is the best one?  How did you find it that fast?”

Tempted to prattle on about seed-to-leech ratio, my mad skillz, and snatch-count, I instead settle for,

Me: “I’m familiar with the ripper, his stuff is always good.”

Her: “OK it says it’s downloaded, but it doesn’t play.”

Ahhh… the torrent novice’s favorite question.  Something along the lines of, “Sweet!  It downloaded so fast, how come it won’t play in Media Player?”  I respond succinctly,

Me: “It’s a torrent file.  Do you have a torrent program?”

While the above response may look ominous, it’s a good sign actually: the word “torrent” is obviously recognized, and the term “torrent program” is not met with confusion.  Heartened a bit, I decide to paint a little reality, just to be safe:

Me: “You need to open the torrent file first and then download the actual movie. It will take time, maybe a day even… unless your internet is awesome-fast.”

Me: “Yeah. This is why I tell my dad to just go rent movies.  Odds are you’ll curse the whole time it takes to download and then you won’t be able to figure out how to watch it anyway.  Then I have to teach you about codecs, and that’s at least as hard, if not harder, than this.”

Me: “Welcome to piracy.”

And then there was this gem with some co-workers as they tried to court me into going out for lunch (I’ve been heading home almost every day to save money and, more importantly, calories.  I know this is not typical for a dude, but I’m really giving this fitness thing the old college try.)

They have decided they are going to Mongolian Grill, which, if you don’t know, is like this huge line where you take an empty bowl and fill it to toppling with meats, veggies, noodles, and top it it with an array of tasty  sauces before the dudes fry it up on this huge round cooktop.  Because my eyes are bigger than my stomach, I typically end up with a four-pound bowl of food.  With my present goals, I don’t think this is the right place for lunch for me today.  Our exchange:

Me: Ugh.  I should try and consume less calories than Mongo will present to me.

Interloping Coworker #1: Lots of veggies.  Not so much oil.

Interloping Coworker #2: Can make anything at Mongo.

Me: No way to pass up noodles.  I love noodles.

Interloping Coworker #1: You can still have noodles, just don’t have a billion noodles.

Interloping Coworker #2: Mr. I Lack Self Constraint.  Do you avoid gas stations in fear of consuming all the twinkies?

Me: Hehe.  Even like 1cp of noodles is prolly 300cal.  I love me some nooooodles.

Me: LOL.  I suppose I could still go.  Just go light.  I can view it as a challenge.

Me: Works for me.

Me: Now leave me to my calorie-math so I can have a mental image of the size bowl I can create…

Me: Yup.  500 is about right for lunch.  Part of the problem is that I have no native sense of size for the measure “ounce.”  It has never been mentally indexed in my brain like “foot” or “yard” has.

Interloping Coworker #1: Not even from your drug selling days?

Me: I also get confused because weed is dry ounces.  An ounce of noodles… what is that?  I know “cups,” but not ounces.

Me: I know pounds.  Pounds I can estimate.

Me: Did you have that in your brain?  Or did you use the joogle?

Interloping Coworker #2: We’ll pick up a kitchen scale at the Dollar Store before we eat.

Well folks, writing is easy when you just post what you wrote over IM earlier in the day.  I should keep an eye out for this kind of thing more often… maybe I could put them on auto-publish and get the blog running itself.  Nah… but it worked well today.

I actually wrote a lot more tonight… on three separate “themes” in fact.  Instead of posting them all here I think I’ll queue them all up for the rest of the week and really will get this thing on auto-pilot.

One Reply to “breakfast with no hog is a good day?”