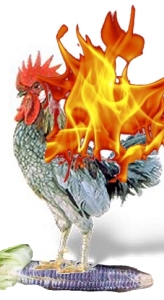 Sunday.  By tradition (or decree, depending on your bent), a day of rest.  And, who am I to mess with tradition?

(Note: I read somewhere that Stephen King once said to an editor something along the lines of, “Whoever made the rule that sentences can’t start with ‘and’ is an idiot,” and went on to note the usefulness and impact of doing so in literature.  And I gotta say, while I’m not a bona-fide writer, I totally agree on this one.  It’s got to be one of the worst, most limiting rules of grammar.  So, I do it.)

My sabbath plan includes a trip to the gym, listening to some music, and reading a little from my book (ten years later and I’m once again trying to finish the Wheel of Time series… but we know how that’s gone for me before).  The iPod is on a Grateful Dead thing, shuffling them up disproportionally – not a bad thing, it’s a good day for some Dead.

I talked about the rain the other day, in the context of our night-of-horrors with sleep-averse Keaton.  Well today the sun’s out and (most of) the clouds have retreated to wring the mountains dominating the eastern horizon.  Most of the time sun after rain is a welcomed change, but we could really use some more rain here… and the bright skies did none-too-much to drive off the chill in the air – so it’s more the kind of sunshine and blue skies you admire from behind windows.  It’s does pick-up the mood a bit though, cheerier than grey and wet to be sure.

So after the gym, and after a quick contorted nap on the loveseat (Sharaun had the couch), we piled into the car as a family and went grocery shopping together. This is a rare treat for me, as more often than not I’m banished from trips to the grocery store.  Sharaun doesn’t do well with my experimentalist approach to  discovering new foods – and has a low tolerance for my aisle-wandering in while I search for interesting stuff I’ve never eaten before.  I want to buy steel-cut oats in bulk, am drawn to the cans with Spanish labeling and a picture of a rooster in flames perched on an ear of blue corn (what the heck could that even be, I wonder), all of the sudden get a hankering for some braunschweiger on rye toast.

In the end I went along with “the list,” and we stuck to our normal fare.