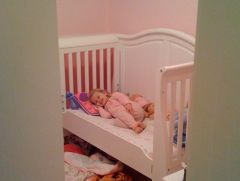 I’ve written a couple times here recently about the escalation of our bedtime situation with Keaton.  To recap for those who can’t be bothered to look here or here, since sometime in December last year she’s really been fighting us at bedtime.

At first it was the whole, “One more story; one more kiss; one more hug; one more one more one more…” bit.  But things had also been steadily escalating, turning from fairly innocent (yet bothersome) delays into full-scale fits and tantrums.  Last week it was to the point where every bedtime was fraught with knockdown-dragout displays on her part: screaming, crying, banging on walls, you name it.  During the peak two weeks ago, these outbursts would last well over an hour before the poor thing gave up and crawled into bed in an exhausted, frustrated defeat.

For us, it made those early hours of nighttime a time to dread.  We both felt bad for how worked up she’d be, yet we were both pretty angry at how ridiculous she was acting.  That “only kids can make you feel this way” mixture of anger and sympathy is sure an uncomfortable fence to be waffling on – one minute wanting to storm in in anger and the other feeling bad she’s having such a hard time.  But one thing was for sure, it was wearing on us all – Keaton perhaps more than we even realized.

Looking back, I told Sharaun we probably should’ve been a bit more cognizant of the fact that the whole  “bedtime/sleep” thing had become quite consuming to our little girl.  In fact, when I mentioned to Sharaun how often I’d played “time to go to bed” with her, or heard her putting her dolls to sleep (under threat of locked doors) – she also realized she’d played along with or seen Keaton playing “bedtime” quite a bit.  I told Sharaun we probably shoudl’ve recognized how much the idea had taken over her imaginary play situations… maybe should’ve seen how much she was thinking about it and realized it must be fairly foremost in her mind.

But hey, I’ve never been a parent before… so I cut myself a little slack.

And, as parents, Sharaun and I figured we better sit down and think out a new approach.  Having seen things steadily grow worse over the last month, we worried that unless we made changes and turned the tide now, it might get even worse (which, honestly, was hard to imagine).  Discussing with our friends (and fellow parents of a three year-old) one night, we laid out our situation and frustrations.  They mentioned that their boy liked to sleep with the door open, and we all wondered together whether or not something like that would work for Keaton.  Being ready to try just about anything, we decided we’d give it a go for a week.

So, a week ago today I setup the new method before bedtime, “OK Keaton, tonight we get to try something special for bedtime!  Mommy and I think you’re such a big girl that you deserve to go to sleep with your door open, just like big girls do.  That means that, after our prayer and story and songs, I’ll give you a kiss and leave your door open when I leave.  If you want to listen to Mommy and Daddy you can, but you need to stay in bed like a big girl.  And, like a big girl, you won’t cry.  You can think of happy things like your friends, or the Backyardigans, or the park, but you need to stay in bed.  Doesn’t that sound good?  Mommy and Daddy are so proud of you for being a big girl like this.”  Yeah, I laid it on nice and thick.

Believe it or not, it worked 100% perfect all week long.  She stays in her room (sometimes with one weak attempt at coming down the hall, which is easily corrected), doesn’t cry, doesn’t scream, doesn’t get all worked up.  She simply rolls over and goes to sleep.  And, for a week now we’ve had nary an issue; it’s been like a miracle turnaround, a bedtime exorcism.  Given the omniscience of hindsight, I wrote to my mom the other day that I think the whole thing might have been one big exercise in a toddler’s desire for control.  In other words, it was Keaton being a control freak; let me explain:

If you’re a regular reader, you’ll remember that, quite a while back, we had started locking Keaton’s door from the outside (yes, despite making us feel just a little “wicked stepmother” -ish).  At first, the lock worked – and seemed like a decent idea.  Keaton would get out of bed, try the locked door, offer a weak protest, and climb right back in to go to sleep.  Sharaun and I thought we’d found a good solution for our wanderer.  As a matter of fact, after a while we even ditched the lock because she appeared to have learned that getting out was futile.  But, as the whole thing got worse over the last month we’d moved once again to using it.

Looking back I think this was our mistake, and it was one with long-to-develop consequences for us and Keaton.  My theory now is that, being three (and perhaps also having something to do with being a little girl), Keaton has reached a point where she likes to feel like she has authority or control over things.  As a kid who’s parents praise her developing autonomy: being able to put on her own clothes, go to the bathroom unaided, etc., I can easily see how she’d place value on being able to exert her will.  And the lock, well that’s just a dead-end street to her free will.  There’s no degree of control on her part, she’s simply stuck in her room with no options.

Think now about an open door and the “big girl” trust involved:  Just knowing she could leave the room if she wanted to… just knowing she’s able to get out, even though she’s not supposed to and it’ll make Mom and Dad upset… just the simple fact that it’s in her hands and not ours.  In fact, we’re leaving the option of good behavior up to her at that point – she’s completely in control of her bedtime fate.  I suppose, if you want to take it to extremes, you could say a lock on the door comes with an assumption of misbehavior or presumed breaking of the rules. I doubt Keaton’s brain evaluates things on that level… but…

Truth in the psychobabble or not, the new “big girl style” bedtimes have been working like a charm.  We’re hoping for another week of good sleep, followed by another, and taken to a point where we can finally call this bedtime beast tamed.

Goodnight folks, have a good Monday.