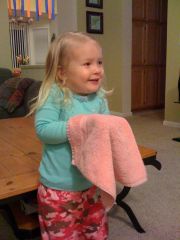 Tonight (Sunday as I write).

Sitting down to dinner, altho it’s a misnomer of sorts this time as Sharaun has decided to do breakfast for dinner.

Sometimes I think I’m the only person on Earth who doesn’t particularly care for breakfast for dinner.  I think it’s because breakfast food tends to skew sweet (especially when my wife’s at the stove), and I’m just not a sweet person.  But even for eggs and sausage and potatoes and the other lovely breakfast like, I just prefer to have it at the temporally-appointed time.  I know, it’s arbitrary…

I’m done with my eggs and sausage and waffle (light syrup, turkey masquerading as hog, and no cheddar in the scramble… the wife is on some New Year’s calorie-kick and I’m along for the ride or on my own for eats – so squarely the former).  We sit and chat, the three of us.  We’ve just returned from an “open house” kinda thing at the nearby home of some folks from our church; some Sunday evening “connections” thing.  Was fun.  We talk about it and then…

I hear the trickle turn into splats on the tile below her highchair (she still eats in it because it’s just easier on us for her to have her own little appointed spot; I expect the “big girl” in her to one day soon revolt). To look at her face you’d have no idea.  She continues to eat, presumably done peeing or simply multi-tasking.  The drip-drip-drip slows and I can see the lights above our dining room table reflected in puddle on the floor below.

Accidents don’t happen that often anymore, but they don’t not happen at all, so I’m still forgiving of the learning process.  The response team jumps into action: Sharaun grabs the girl and lifts her so her pants drain – it’s gonna be on the floor and chair anyway.  When she’s dripped-out, she’s removed from the scene and I swoop in for my part.  Removing the pad she sits on, I fold it in half and try to keep as much from dripping as I can before moving it outside. I follow with the highchair itself.

Outside is key; I put the chair in the grass in the dark.  Turn on the hose (it’s cold out here and I’m still in my socks) and give the thing a good spraying.  The pad goes back to Sharaun who’s already got Keaton stripped and in the tub.  Clothes and pad go into the washing machine.  Back in the kitchen I sacrifice a clean dishtowel to sop up the mess.  Once cleaned, pull the Lysol wipes from under the sink (thank you my Lord and Saviour above for Lysol wipes – your creation continues to amaze me).  Three or four passes later I’m satisfied that the general area is clean.

The wet dish towel goes into the wash and I hit the button. I dry off the highchair and pull it back inside.  Keaton’s playing now, Sharaun already got her clean – she’s making “Chichen Itza Pizza,” ala Backyardigans (don’t it eat if she offers though, it’s really just the pink washcloth with some invisible/pretend pepperoni on there).  I finish off the dishes, kick off the dishwasher, and wipe down the table and counters.

All told, we’re back to normal with, at most, a 10min delay.  Pretty good, if I do say so myself.  All those drills we ran before kids really paid off.  Pee at dinner in the highchair: Not a worry, we got it locked.

One Reply to “fire drill”