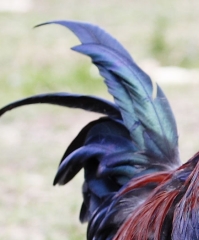 Got one question on the “meaning behind” yesterday’s blog. No meaning, just random. An exercise to write in-character, something I wish I did more of as a creative thing… rather than the “I had this for dinner; Keaton said this” stuff. Sorry to throw you off, and I promise I’m not a misogynistic cocaine dealer.

Did you guys know that when I got married we hired a professional DJ for the reception? Well, we did. As part of our arrangements with the guy before the event, he gave us some printed song lists and preference sheets. A great idea I thought, as a music-nut. Along with the standard things any wedding DJ might ask, such as desired songs for featured dances, our DJ asked if there were any particular songs we’d prefer not be played at our reception. For this I was grateful, as I’d already gotten the “OK” from Sharaun to outlaw a few choice numbers from the event. On my list were such wedding staples as “The Chicken Dance,” “Macarena,” and “YMCA.” I can see how this might surprise some, being so uncompromising about what might be called the “sure things” of the all-inclusive dance-party circuit. It’s what I wanted.

Oh but I was young!, and have since learned.

As much as I did, and still do, loathe those songs, I realize now that, for the sake of participation on the dancefloor, such musical atrocities must be tolerated. Because, although it’s trite as all get-out, people will get out of their seat and do the Electric Slide. Back in my youth, though, I was above such things. No one at my wedding would be throwing their hands in the air to Isley Brothers if I could help it. We would instead dance to a masterful selection of “good” songs, and not be bothered. I knew “It Takes Two” can pack them tight on the floor, and that dads really only dance with their girls when it’s the chicken dance, but I didn’t care. What a pompous self-indulgent attitude. Sorry wedding guests, I have only myself to blame.

In the end, our massive tool of a “professional” DJ played nearly every single song we’d asked him not to. Perhaps he took professional liberty in order to save a wilted party (when my friends found out there was no alcohol, they simply left with a handshake and well-wishes), or perhaps he was just an idiot. I’ll never know. But, the tables emptied for “The Chicken Dance,” and the Ys and Ms and Cs and As had the place on its feet. So, maybe I owe the tool a “thanks.”

Have a good weekend friends.  Ours is all kids: babysitting and baby-birthdays.  Wish us luck. Goodnight.