Tuesday and I took the day off (or something…) to take Keaton to the snow with her friend Matthew.

Matthew’s dad arrived shortly before 9am and we set off to the local “waffle” prefixed breakfast joint (y’know, the ones with the cat-head biscuits).  Ordered me a meat++ omelet ripe with fatty jalapenos and cheese and all kinds of sausages that had all kinds of different names.  Whomped that on down in sequential bites comprised of equal parts omelet and “homestyle” potatos.  Keaton and Matthew split a ham and eggs plate, and left their hasbrowns untouched (blasphemers).

We were on the road up the hill just after 10am.  Up a winding mountain road, we found the perfect patch of as-yet untouched-by-humans snow just before noon (had to stop for a couple kiddie potty breaks and to separate the car seats to prevent hair pulling and ear-poking).

The snow sat in thick drifts, but the sun was out and the weather was don’t-need-a-jacket warm.  Kevin (Matthew’s dad) and I ventured out into the snowfield first to see how deep it was.  My first steps and I was in to the knee.  Laboring, step-aerobics style, I lifted my foot to take another – and ended up just as deep.  We test-dropped Matthew onto the surface: guess being 15% of my weight is an advantage in deep snow – he and Keaton just dropped in a couple (manageable, as far as locomotion is concerned) inches.

Keaton whined for me to carry her for the first five minutes (that child is, through and through, one-thousand percent girl, being innately scared of everything).  After some time though, she was tromping off faster than knee-deep Daddy could follow along – quite independent.  Before long she was eating snow and peppering me with the balled-up stuff, like any good kid in the snow should their dad.

We dug holes; we built a sorry, sorry snowman (the snow wasn’t wet enough to hold shape); we pushed the kids once or twice in the saucer-sleds before they let us know they hated that; we ate white snow like ice cream; we had adult races to see who could move the quickest with each foot sunk in snow (I lost, face-down freezing-hands style).

For me, it was a Dad’s day with his daughter – and I loved it more than words can tell you about.  Here are a couple pictures, maybe they will help explain: 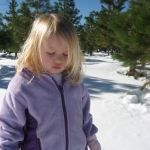 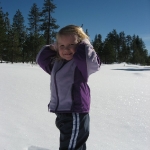 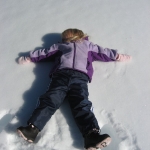 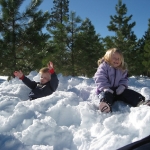 Gosh, those weren’t that good at all; and I look straight bald in one of them.  But, that’s it.

I didn’t even intend to write, but I had this in my head and the new Animal Collective album played loud (Sharaun’s out, Keaton’s asleep, and it’s my roost to rule for the time being) shook it loose onto the internet.

One Reply to “our white day”