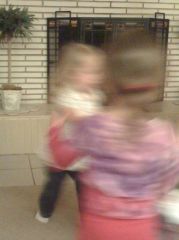 Last night in Florida; this one’ll be a dirge.

We went to dinner with the family, sans a couple members who are down and out with a stomach bug.  We got together with a friends from years past who we haven’t seen in years (and, our kid played with the kids of our friends, in a series of surreal “Oh crap, I’m totally old” moments).  Sharaun and I even split up one night to canvas acquaintances, since we’ve got so many folks we like hanging with down here.

All in all though, and I know I’ve said this as many times as I’ve written over the past few Florida days, the visit felt as long as it was – which is actually a good thing, as we often end up feeling like we had too little time, even though the days numbered enough.

And now, back at the inlaws’ rambling ranch-style Florida, built strong in the old days with cinderblock and copper pipe and thick walls, Pop-pop started a fire to push the cold air back outside.  That’s right: It’s cold tonight in Florida.  In fact, the news said lows in the upper 30s, I think.  For the central Florida coast – that’s chilly.  It’s a pungent coastal oak burning, but the chimney has a good draft and all we get is a slow-moving comfy warmth.  Keaton’s fascinated by the fire, which isn’t entirely unexpected given her lineage.  Upon returning home, sated and loose, we all took turns warming while staring into the flames – it’s primal, you know, staring at fire… in our blood from those very first days.

It’s comfortable here; I’m beginning to wish we could stay longer still… because, really, what’s to get back to?

But, reality calls… it’s back to work on Thursday, and I won’t lie and say I haven’t been checking e-mail on the iPhone – because I have.  Even sent a response or five hither and thither.  It’s hard for me not too, I’m so connected to the place… umbilically tied to the sawmill, stuck at its teat even when away.  With the holiday week, doesn’t look like I missed much – so the ramp back into things shouldn’t be that bad.  Although, returning to the mill alone will surely defeat my vacationing spirit; just suck it right out and stomp on it.

And with that I think I’ll hang up the hat for tonight.  With thoughts of one more morning of Florida sun to wake to, we bid you adieu.  Goodnight.

One Reply to “counting the hours”