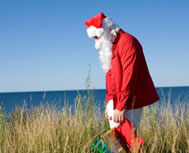 The molasses pace of this week and a half is more than I could ask for.  Every day I wake up thinking it’s a day later than it really is, and am pleasantly surprised when I realize the error.  So, when today was Monday as I rose, and I realized we’re down to our last two days – it was something of bummer.  But, let’s move on from all the talk of vacation-end and get on to some talk of vacation-happenings.

The other night we took a short walk down to the city park near Sharaun’s folks’ place.  It’s located smack in the middle of the historic shopping district here, and the city has done considerable work over the past ten years or so really shaping the place up.  In fact, it looks really good down there – and the crowds drawn to the park, temporary ice-skating rink (yes, in Florida), shops and food seem to show that the work has paid off.  We’ve walked the short mile or so down there a couple times already this trip, and each time have really enjoyed letting Keaton run around in the park and strolling the shoplined avenues.

This particular night, however, we were there right before dinner and the light was beginning to dwindle.  As we played in the park, we began to notice a man setting up lights around a sleigh sitting central to the goings-on.  Sure enough, Mr. Claus himself showed up for pictures with kiddies just as we were getting ready to make the walk back home.  When Keaton saw him, she absolutely lit up.  She looked at me, looked at mom, looked back to Santa – and just stood there struck like a stone, mouth open and wide-eyed.  I finally said to her, “Do you want to go say ‘hi’ to Santa?”  “Yeah!,” she squealed as she tore off in his direction.

There were several kids flocked around Santa, and she sort of sidled up alongside them in the back row and just stared up at him in awe.  Eventually, the throng thinned and she had a clear shot at him.  She stared right up and him and said, “Hi Santa!”  Only, she said it sort of smallish and demurely, since that’s just how our girl is.  Unfortunately, Santa did not hear her salutation, and instead turned his back to her to talk to some other kids.  At that, Keaton waited there a minute, wringing her hands, and the walked back to me with the sorriest, saddest look on her face I’ve ever seen.  When she got to me, she said, “He didn’t answer me,” in the most forlorn little voice.

I was absolutely heartbroken; felt crushed right along with her.

Trying quick to recover, Sharaun and I both said something along the lines of, “It’s OK baby, he just didn’t hear you that time.  Go on back over and say ‘hello’ to him a little louder this time so he can hear, OK?”  With a little prodding, she walked slowly back over and found another opening for some one-on-one time.  This time, Santa saw her first and stooped to speak to her.  As he did, she was excited, but I could still see the reluctance in her eyes from his initial spurning.  When she came back, she was a lot happier, but I could tell she still had some misgivings about this Santa guy.

Later that night, as I was putting her to sleep I asked her, “Wasn’t it fun meeting Santa today?”  “Yeah,” she said, and her voice turned frost cold and sad, “But… he didn’t answer the first time.”  I about bust out into tears right then and there.  Poor girl.

Sorry for the sob story… I promise it’s not indicative of the week.  In fact, we’ve had a fantastic time – and I suppose I should’ve chosen to relate a funny story instead, but that one stuck with me as something that might “blog” well.

One Reply to “spurned by santa”