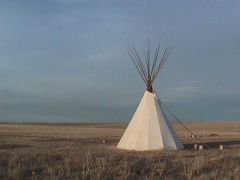 Sharaun’s arrived safely in Florida last night, and I spent the day cleaning and recovering from the party.  People ended up coming over for football Saturday, despite most of them having just left the night/morning prior, and we grilled ribs in the rain (with a huge umbrella shielding the fire).  I steam-cleaned the carpet and did general pickup and tidying.  Place looks good for a guy left alone for a weekend, I must say.

Keaton’s in the kitchen eating her waffle and yogurt (one of her favorites – Sharaun had a stroke of brilliance substituting syrup for a yogurt “dip sauce” and it works great).  When she’s done I’ll get her down and jump in the shower to shave and get ready for church.  Don’t tell Sharaun, but I brought her into our bed last night to sleep with me; I mean, it just seemed like there was so much empty space there.  And plus, it’s just her and I this weekend – so I can do what I want.  (I was beaming proud inside of the ponytail I gave her the other day when people told me it was an exceptionally good “Daddy do.”)  Since I’m working remotely tomorrow with her, I think we’ll go on a picnic for lunch.

OK, what about Halloween?

Halloween went great this year.  And not just the props or the party, but the trick-or-treaters too.  We got quite a few more than in years past and all of them seemed to get a kick out of the setup.  A setup which, by the way, remained 100% functional all night – gremlin-free for the first time ever.  So, yeah, Halloween night was the single solitary rainy and windy day all month… but ain’t that always the case?  Just before dusk fell on the street I had two uprooted tombstones needing repair and one backwards-facing witch I had to tweak.  But, things totally came together in the end and the wind even died down enough for the fog chiller to do it’s business.

The party also went off swell, with a great turnout and honestly one of the best times we’ve had at a party we’re “in charge of.”  Several people mentioned that it was fun – so I’m happy.  And guys, one of the best moments of the whole night for me was when the second distinct person came up to me and praised my garage playlist.  One guy even said, paying his third or fourth compliment, “Where can I buy this playlist?!”  Well, he screamed that, actually – over the cacophony of Wreckless Eric’s “Whole Wide World.”  Being that it was a somewhat hasty and totally eclectic mix, I was worried.  Look, I’ve now written something like three paragraphs about the dang iPod playlist… sheesh.

Oh, and just in case you’re that guy… here… it’s just over six hours of music and it’s way better than Sharaun’s: