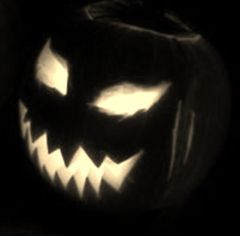 Hope your Wednesday was OK; mine was.  Some friends invited us over for another debate-watching party tonight, so with no time to get things done after work I snuck out about thirty minutes early at lunchtime and got some finishing work done on the Halloween display.  I setup the sound and did final placement and tacking on cables and motion detectors and whatnot.

I’m really happy with the way things turned out.  I’m using the prop activation timer as it’s supposed to be used instead of just as an afterthought as in 2006, and the rest of the work is just icing at this point.  Halloween could be tomorrow and I’d be OK (providing I carved a pumpkin or two with Keaton before nightfall).

And, since I’ve had at least one person ask me to see a video of the whole house “walk-up” as it’ll look to trick-or-treaters, here’s something I put together quickly tonight.  The only drawback to this video is that I don’t yet have the light hooked up to the ceiling dropper – so I had Sharaun hiding out shining a flashlight on it at the right time to simulate.  Unfortunately, the flashlight just isn’t bright enough and the effect doesn’t come through very well in the video.  Owell, maybe I’ll reshoot it once I hook up the real light (which will be a bit more orange and a lot more bright than what you see here).  So, check it out, and, come get some candy… if you’re not too skeered!

Get the latest Flash Player to see this player.

Anyway, with that last light and a couple handmade glowing Jack-o-lanterns it’ll look a lot better… I added it to the Halloween gallery too, y’know, for posterity’s sake.  Let’s move along now.

One of my best buddies has a daughter whose spending a year studying abroad in Sweden.  Before she left, I helped her setup a blog here on the pharaohweb.com servers so she could keep the masses updated with her foreign goings-on and post pictures and do general bloggy stuff.  She’s been gone now for a few months, and I’ve enjoyed reading her blog a lot in those times – it’s kind of like I’m getting to experience the whole culturally-displaced thing through her (even though she doesn’t write nearly enough).  Her last entry, however, really made me stop and think.  I’m gonna link it now without much setup or commentary and just let you take it in for yourself.  Read it by clicking here… heavy stuff for someone I still think of as the eight year old I first met so many years ago.

For real though, I’m straight-up doing a year abroad vicariously through her… since I was too chicken to ever do anything like that when I was younger.

OK folks, it’s coming up on 10pm and I need to not be at the computer for a bit.