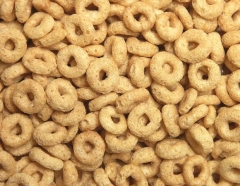 Hi guys, it’s Friday.  I’m ready for the weekend.  Ready to pack, and take to the skies around 10am Monday to get to the trailhead for our early Tuesday hike-start.  Let’s do this.

Tonight around ten o’clock, and after doing the dishes after watching Barack after eating dinner after playing with Keaton after taking off my workclothes and putting on gym shorts with no shirt after turning off the iPhone that was streaming the freshly-leaked Mogwai album after pulling into the garage after leaving work after running my staff meeting after working like three men again after grabbing Indian buffet for lunch after working like three men after grabbing my coffee and a fuji apple for breakfast after driving into work while listening to the freshly-leaked Mogwai album after getting dressed after showering after waking up, I decided to make a bowl of Honey Nut Cheerios to satisfy a latenight craving for something sweet.

Sharaun was in the living room stretched out on the big couch and had a good vantage of the countertop where I placed the empty bowl I pulled from the cabinet.  She watched as I pulled the box of cereal down from the cabinet and poured it into the bowl.  Here’s a pretty good approximation of how that went:

Oh my God David, how much cereal are you putting in that bowl?  Did you leave any? Why do you fill it that much?  Who makes bowls of cereal like that, anyway?  I saw you use your hand to push it down so it would fit!  What do you think it’s the Mongolian Grill?  Is there going to be any for Keaton in the morning?  Where are you even going to put the milk now?  Seriously.

I didn’t leave my side of the conversation out of that either, I just sort of stood there chuckling as she went on.  Sometimes these unprovoked rants really crack me up.  And, even though she was half-joking, there were definitely shades of the three-hundred babies thing from blogs of yore.  Anyway, I thought it was funny, and smiled all the way through my enormous bowl of delicious Cheerios.