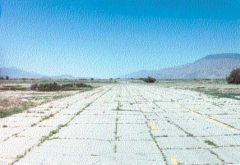 It’s the end of Wednesday and I swear I’ve done a week’s worth of hard work in this first half.  Between making up for my vacation last week and trying to get a little ahead to take the edge off my vacation next week, I’m cramming…

Random and scattered today, be prepared.

Today, I got re-excited about our hike for a whole new reason.  Turns out Ben has a pilot buddy who owes him a favor and is likely going to be in town next Monday.  In recompense, he may be willing to ferry Anthony, Ben, and I to a small airstrip in the Sierras close to our trailhead.  This would be a in six-seater twin-engine job, flying from here down there in a fraction of the time it would take to drive, and, probably more importantly, salvaging my marriage by taking the burden of the eight-hour roundtrip drop-off from Sharaun and Keaton.  I can just imagine packing into a private plane, all geared out for our hike, loading our packs up and taking off into the mountain skies.  I mean, it’s like a whole super-bonus beginning to what stands to be an incredible adventure already.  And, while it’s not 100% confirmed at this point, I would say we’re trending positively (sorry for the sawmill-speak, laymen).  So rad.

Late last night the new New Kids on the new New Kids on the Block album leaked, and today I downloaded it for Sharaun.  Oh man was she happy.  What?  Oh, you didn’t know the New Kids on the Block were back together?  Yeah, they are.  All their songs sound like the last Akon or Chris Brown song you heard on the radio, right down the the thinly veiled sexual lyics and robotic pitch-shifting voice effects ala Cher’s Believe.  But, my wife, whom I love to death, loves this band to death… and has spent ungodly amounts of dosh on concert tickets for their upcoming shows (where, in the apparent fulfillment of one of her lifetime dreams, she’ll actually be going to “meet and greet” the band).  Anyway, we listened to the album most of the evening – it was even our dinnertime soundtrack.  And, let me tell you guys… it’s bad.  Real, real bad.

Today Keaton and I had a teaparty with three of her dolls, Finny, Claudia, and Hannah.  Although, instead of tea we had coffee… and we doctored it with sugar, cinnamon, and nutmeg (her idea, I promise).  We had “biscuits” with our tea, which were actually tiny pieces of plastic fruit (go figure).  Sometimes I like to play the big brother role and do things like pretend to spill coffee or “accidentally” knock over one of the babies… maybe you think that’s mean but I enjoy seeing how she reacts to things.  Sometimes her reponses to situations floor me, she’s so mature seeming in some ways (well, for a two and a half year old… or whatever).  Parts of my insides cry when I think how fast she got here though… so I want to enjoy as many teaparties as I can, while I can.