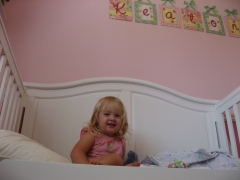 Early evening Sunday and Sharaun and Keaton packed off for a dinner thing at church without me (I’m still feeling a bit worn-down from the case of the sniffles I had last week).  Had a nice lazy day today, watched the new Rambo flick on DVD with a buddy and then, our thirst for manly movies still not quenched, queued up John Wayne’s El Dorado afterward.  Now, though, with the house to myself, I’m just watching some old TiVo’d Leave It To Beaver reruns – I take solace in black and white sitcoms from days-passed, for some reason… maybe there’s something to that whole “past lives” thing.

Anyway, Saturday after we took Sharaun’s mom and dad to the airport I came home and took off  the front side of Keaton’s crib, effectively turning it into what the instruction manual calls a “daybed.”  We instead call it her “big girl bed.”  It was something that had to be done, although Sharaun protested the fact.  Keaton’s been climbing herself out of the crib now for quite a while, and I didn’t see any point in keeping her in it any longer.  I mean, we feel lucky we got two-and-half years with the four walls – most our friends with kids Keaton’s age moved into “big kid beds” a while ago.

Anyway, Sharaun argued for keeping her in it longer; I think partially because Keaton wasn’t really protesting the arrangements (other than climbing out), and because she thought that converting it would make it all the easier for her to get out of bed on a whim, or, rather, give her less of a reason to “settle down” and drift off to slumber.  In fact, I was almost wishing I’d listened to her when we put her down for her first nap in the newly-converted bed that afternoon – as it took her a while to get herself to sleep.  I maintained the same had been happening for the past week (which it has), crib or daybed making no difference, but Sharaun still insisted I’d made a mistake.

To save my “Dad cred” a bit, I went in and put an extra effort into soothing her into sleepy-time that afternoon, and the nap eventually went off as a big success (as did that night, and everything since).  So once again, I have proved my fathering chops… or something.

Today, however, the naptime exchange I had with Keaton was worth noting.  Sharaun had a baby shower downtown after church in the morning, so Keaton and I headed home together for lunch, a little playtime, a much-needed bath, and, finally, her scheduled nap.  After drying her off, fresh out of the bath, I put her in some comfy clothes.  Normally, this is when we’d retire to the rocking chair where I’d sing her a few songs to hasten the sandman’s arrival.

But, before I could scoop her up into my shoulder and sit down she said, “I need to take my nap now, Daddy; I’m tired.”  OK, that’s different; she followed with, “I don’t want to sing any songs before my nap.” Hmmm, “You don’t?,” I asked.  “No.  And I don’t want to say a ‘dear God’ either.  I’m just gonna climb into my big girl bed and you close the door and I go to sleep.”  Honestly, I came out and wrote that down word-for-word verbatim as soon as I left the room, those are her exact words.

So, that’s just what I did.  She did let me tuck her in, and I did manage to sneak a kiss on her forehead.  Turned out to be a great nap too, perfectly long enough for Rambo and El Dorado.

Well, that’s that… time to shut this thing down.

Seven days, friends; seven days from today… that’s when the guys (Ben, Erik, and Anthony) and I head down to Yosemite for the first nights camp on our epic John Muir Trail “redo” hike (well, it’s a “redo” for Anthony and I, maybe just a “do” for the rest of the crew).  We’ll make camp that night and hit the trail early the next morning.  I’m getting more and more excited by the day (and developing just a little anxiety as well).  As promised, I’ll get the full day-by-day itenerary up sometime this week before we ship off into the hills.

One Reply to “the big girl bed”