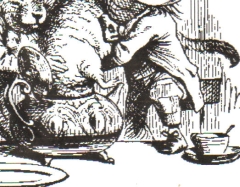 Wednesday.  Sorry for the sporadic entries of late, I’ve been busy with work… and a day without time for my mind to wander usually means a night without much to write about.  Gonna be random today I think… but I want to get something out there.

Last night we had friends over for dinner.  I came home about an hour early to start the barbecue and char the meat; not a bad deal.  I can remember watching my dad barbecue for us when I was a kid, we had one of those traditional round Webbers, black – the kind like you see in those 1950s episodes of Leave It To Beaver or Ozzie and Harriet.  I remember we had some sort of Sunset Guide to Grilling cookbook which showed the novice grill chef how to form two mounds of charcoal on either side of the bowl for indirect heat.  I was always fascinated with cooking over fire, and still enjoy it.  So, like I said, coming home an hour early from work to start a fire and cook meat isn’t bad at all.

Tonight Sharaun had a volleyball game so Keaton and I got some time to hang out just Dad and daughter.  We took a nice long bath, playing in the bubbles and transferring water from one litte cup to another.  After that we got dressed for bed and brushed our hair (I brushed hers, she then returned the favor), and played for another ten mintues before getting into the crib.  We had a little tea party, and played in the “pretend pool” (which is just a comforter spread out on the ground with pillows for “floaties”).  I like when I can give her my full attention, although I admire Sharaun for doing it all day long, as it’s pretty demanding and requires putting aside whatever you might want to be doing (I mean, not to say I don’t want to be playing in the pretend pool with my daughter… but you know what I mean).

It’s less than a month now until Anthony and I embark on our “makeup” trip back into the Sierra backcountry along John Muir Trail.  This time, we’ll be four as Ben and Erik will join us as we try to finish the sixty-plus miles we failed to complete last time around – stupid snow… (what, you don’t believe me?, there totally was snow).  The four of us got together last week to have a planning session (read: pizza and beer and about fifteen minutes of me going over our slightly-modified last year’s itinerary).  I’ll go ahead and do a big kickoff entry here as that date nears, with the same kind of boring data I posted last time (I know, you can’t wait).  I think we’re all getting pretty excited, and hopes are high that we don’t get turned back by weather this year.  (In fact, the portion of the hike we plan to do this year has few “easy” outs, so we’re banking on Mother Nature being good to us).

I guess that’s all I have.  Bloggin’ ain’t easy lately.