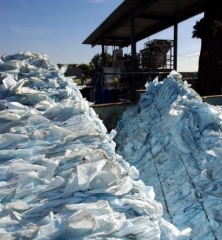 What a smoky steamy day here in Northern California.  110° and not two miles visibility through the choking haze as California continues to burn.  But, aside from that nastiness, it was a good day.  Got a lot of work done, took my lunch hour (or, y’know, hourish) and met Sharaun and Keaton up at the local “kids bounce” place (which was packed with moms and kids looking for an indoor playground removed from the smoky simmer outdoors).  I brought us some lunch, we ate, and we bounced.  Yeah, it was a happy day.

And, t’would be a good bit happier had the Senate yesterday not followed the House’s shameful FISA legistlation vote, continuing to trash our civil liberties while retroactively clearing anyone of blame.  What a joke; great job “nonbinding withdrawal timeline” Democratic Congress – you sure showed ’em.   Check this, fellow Obamaniacs:

I strongly oppose retroactive immunity in the FISA bill.

Ever since 9/11, this Administration has put forward a false choice between the liberties we cherish and the security we demand.

No one should get a free pass to violate the basic civil liberties of the American people – not the President of the United States, and not the telecommunications companies that fell in line with his warrantless surveillance program. We have to make clear the lines that cannot be crossed.

That’s really all I’m going to say about it, for fear of not being able to see my readership from up on this soapbox.  Moving on…

It’s been two weeks since Keaton decided she would suddenly be potty-trained.  And, I’m happy to report that, during that time, we only had one off day.  Other than last Thursday, when we actually had to put her in a diaper because her brain seemingly forgot about her recent conversion, she’s not had a single accident.  I’m going to count that as twelve days.  We put her in “big girl underwear” now (Dad simply can’t bring himself to write, Heaven forbid say, the word “panties”) each morning, and she keeps them dry all day.  Not only has she proven herself to us, but to the workers at the nursery during Sharaun’s mom’s group and to a friend/babysitter last night.  I’m pumped.  Dunno when I can call it “permanent,” but I’m more confident thinking we’re almost there.  Bye-bye daipers!

Well, that’s it for tonight.  A mixed bag I’m afraid.  Hopefully it was somewhat readable.  Goodnight.