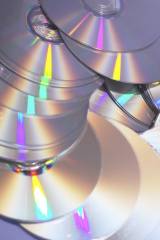 Know what?  Andy Griffith does look like crap on a 50″ HDTV.  I knew it.  It looks sweet, however, when viewed from DVD on the same said TV.  Too bad I’m, for the most part, too lazy to queue up episodes on DVD versus an episode recorded off TVLand last night.   The poor guy who came to hook up the HD ended up spending five hours of his morning here, and I ended up spending an entire day “working” from home when I didn’t intend to.  Those kind of days always make me feel guilty – when I, for whatever reason, can’t focus on work; like I’m stealing a paycheck.  Guess I’ll have to work double-hard tomorrow to ease my conscience.

The other day I happened upon a backup copy of the Microsoft Access database I wrote and used to manage all the CD trading and selling I used to do back in college and through into our early California years.  I’d long ago password protected the thing, just because I was worried it would be a treasure trove of evidence against me should I ever find myself prosecuted.  And, of course, I promptly forgot the password.  Over the years I’ve tried a couple times to brute-force my way into the thing, casting my mind back to passwords of yore, but I’ve never been successful.  I don’t know why I want to look at it, I just do.  Then, the other day, when I randomly came across the thing, I decided, also randomly, to try one of my modern “stronger” passwords on it.  Surprisingly, it opened right up.

Once inside this thing it was like a walk down memory lane, with names from the past and a regular timeline of when I acquired all my best illicit discs.  Not to mention a running record of all the monetary exchanges I made back in my “copies of rare discs for money” days.  For kicks, I cut all the money I was paid out of Access and into Excel, where I could sum it.  Imagine my shock when I found that, between January 1999 and September 2002, I apparently made a whopping ~$7,000 selling burned CDs.  Wow.  And, of course, I reported all this income on my 1999, 2000, 2001, and 2002 income tax returns – as any dutiful citizen of this great nation would and should.  Crazy, right?

In other news, the smoke that hung thick over our city last week has finally blown away, and has been replaced with blue skies and warm weather; Keaton’s still keeping her “big girl panties” dry; and my head still isn’t “into” writing.  I’ve just been too consumed during the day to think about writing.  I’m sorry, maybe it’ll work itself out by tomorrow.  For now, though, this is all I have.