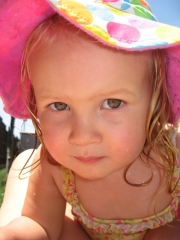 Hi guys.  It’s Tuesday.  I finally uploaded some new pictures of Keaton to the gallery, go ahead and go check them out now before you come back and read another enthralling installment of sounds familiar.

Didn’t end up going to bed Monday night until nigh on one in the morning. That’s not good. I got caught up twiddling with the bootleg MP3-tagging script I wrote so long ago, after I discovered a bug while trying to tag-up some illicit Zeppelin files. Seems like I mess with the thing a couple times a year… maybe it’s good for me, keeps my coding kung-fu on-point (or something). I got up early to shave, too, being that my beard had degenerated into a twisted mess marching down to meet the chest hair curling skyward. It’s like the two are long-lost lovers, the evil Gillette corporation keeping them apart.

I’m supposed to go to a concert tonight in the city, The Fratellis.  Problem is, I leave for Portland tomorrow morning at 6am, which means I’ll need to be at the airport by 5am, which means I’ll need to leave the house around 4:30am, which means I’ll need to wake up around 4am.  Now, I don’t know how many of you have lived in the city I live in and gone to a show in San Francisco – but, if you had, you’d realize that you rarely get home before 2am afterward.  And, if you passed 3rd grade math you’ll realize that I’d be getting, at best, two hours of sleep tonight before having to wake and head out again for my flight.  So, long story short, I think I’m gonna bail on the concertgoing crowd and spend my time packing and getting an early hay-hitting time.

I’m just too old for all this.

Last night as Sharaun was putting Keaton to bed, she (Keaton) said, “Mommy, I recognize there’s no ducky on the wall.”  What she meant by that was that Sharaun hadn’t yet done the pre-bedtime nightlight shadow-ducky thing we do with her, but… “recognize?” Sometimes I wonder where she gets her words from.  I don’t think we  even use the word “recognize” that much… and I’m pretty sure I haven’t heard it on the Backyardigans.  That kid and her oratory-wizardry blow me away.