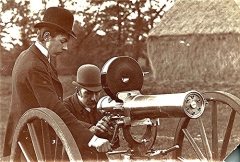 I’ve had a bad run of blogging lately, I’ll admit it.

My writing has lacked some of the inspiration I thought it had a few weeks back. For a while there I thought I was doing pretty good. Maybe I need to bring back the polls or something, give myself a shot in the arm, some inspiration towards better output.

Like right now, for instance, I’m just now getting around to finishing up this long-lost entry for posting tonight – and it’s almost midnight on Thursday. We just got home from watching the Lost finale with friends, and the blog had to wait. So, without much new editing, I present the following story.

The first time I heard Radiohead’s debut album Pablo Honey was at a girl named Lindsay’s house. She was fifteen and beautiful. I had never met her before, but she was a friend of my Jeremy, who was a friend of mine. I had just earned the legal right to drive, so he asked me if we could go visit this girl, who he promised was hot and would have a friend around. She lived about a forty minute drive away, but her parents were out of town or something and a nothing-to-do teenage day combined with the fact that her parents weren’t going to be home justified the trip. At the time, I was in love with Radiohead’s breakthrough single, Creep, but hadn’t bothered to investigate any of their other output.

It was raining sometime terrible that day, and I was driving down some unfamiliar backcountry Florida roads to get to this girl’s place. On the way, Jeremy told me about her: Lindsay was apparently not only gorgeous, but she was also a badass. According to her, she was in a “gang,” and also had a gun. I was both intrigued and a bit wary, as wanna-be-gangsta girls weren’t (and aren’t) my kinda thing. I fully expected to pull up and meet some skinny white girl with one of those chin-length bowl-cut things where the back of their head and neck is shaved, figured she’d open the door wearing some baggy FUBU stuff, a crooked hat, and wearing chains while some unremarkable rap blared in the background. Man, I was wrong.

After surviving the harrowing drive, we ran through the downpour to the refuge of her porch, where we knocked. The stunning creature that opened the door was the perfect picture of a budding female. Flowering before my eyes in real time, she had dark shiny hair, worn short yes – but not like any teenage gangster I’d seen on Maury before. She was slim and fit, but surprisingly curvy for someone just beginning to flex her burgeoning femininity. Oh, and, she knew without a doubt that she was attractive, and had already achieved a mastery of the subtle arts of flirting. She was wearing a close-fitting top that V’d at the chest, and tiny shorts that left little to the imagination. I’d like to say I recall details like colors or fabrics or something astute like that, but I don’t – I think my brain may have been deprived of blood, for whatever reason. I knew immediately that I would be in love with Lindsay before we left that house that day.

Turns out her friend couldn’t make it. So, here we were, two teenage boys and one teenage girl all alone in this big old house with zero adult presence. Oh sure, the porn scripts ran through my head, I’d be lying if I said they didn’t. And, when we all went immediately into her bedroom, I half-feared I might really have to negotiate my best friend Jeremy’s nakedness were things to go all Vivid Video. Thankfully though, things stayed innocent and simple – something that, at the time, I’d likely pretend like I wish wouldn’t have happened, but would, in reality, be glad had (I’ve always been a better love-talker than love-er, I think). In fact, we all just lounged around on the floor or the bed and talked. I told Lindsay I heard she was in a gang and had a gun. She didn’t deny the former, and never produced a pistol to prove the latter. Funny thing was, this whitebread honor student was about as far from a gang-member as I could imagine.

At one point, she grabbed a CD off her dresser, Pablo Honey. “Have you heard this?,” she asked us. Neither of us had, aside from the single. “It’s my favorite album in the world right now,” she said as she popped the disc into her little table stereo. Again, Radiohead, not the most “gangbangin’” thing I can think to listen to. I remember to this day not liking the album when I heard it that day. In fact, it wouldn’t be until years later, when I went completely weak in the knees for OK Computer in college (even after also loving The Bends), that I would pick up a used copy of Pablo Honey at the record store and rediscover it.

I never saw Lindsay again. A few hours on one day back in the 90s, that’s all I got. Dunno that I really wanted more, but that was it anyway – so, that was it.

So, Lindsay, sorry I discounted your music. Turns out you were right about Pablo Honey, it’s a great album… hope things worked out for you and your gang or whatever. Goodnight.