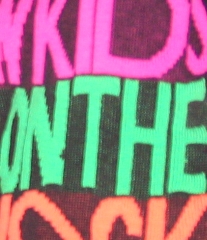 Internet, I am here again.

It’s something like 10pm on Wednesday night and, luckily, I wrote about 80% of this entry in a “creative” fit last night, only having to come back tonight to add a few rounding-out and closing paragraphs and proofread. It’s kinda long, actually, so I’m just gonna skip the intro and get right into it.

Hey, remember when I used to talk about music a lot on here? I mean, I used to do it all the time. Lately, though, music talk is usually relegated to a couple sentences here and there about a new album I like or what leaked recently or a the show I just went to. Well, for those looking for me to make a triumphant return with a music-centric post today, you’ll be happy. For those of you who typically gloss over the “music stuff,” I urge you to tune in today – as it’s really more of a story set around music, not just me talking about the latest Weezer album or something.

Oh, and, if you really are the kind of person who truly misses all the music stuff (I’m not even sure there are those people, actually), take heart – it’s almost June and that means it’s time for my annual half-best-of list for 2008. Look for it sometime soon, OK? OK.

Hey… have you guys heard that the New Kids on the Block are back together? No? Yeah, me neither.

Ahhh… guys… I wish I could say that, but the fact is that I live with the biggest New Kids on the Block fan I know in this world (yes, we’re talking about my lovely wife). I’ve always known this about her, from our very first encounters with each other back in middle school when she came to school wearing an eight inch round button with their five pubescent faces smiling out from below a neon 90’s paint-splash logo. In fact, to this day, that button resides in a box in our garage, along with a posterboard New Kids collage of images she cut from magazines like Tiger Beat and Bop!. I’m for real.

You may think that, over the years, as her tastes matured, she’d have taken time to reevaluate her love for the “band,” perhaps listening to the with the learned ears of someone who’s been schooled in “real” music by her husband (who, I might add, has impeccable taste). Yeah, you might think that, but you’d be totally wrong if you did. In fact, if anything, her infatuation with the band has continued to be a rolling snowball. I remember shortly after we first moved to California, she took off alone in the early morning hours to drive to San Francisco and stand outside some radio studio to meet Joey McIntyre (the Michael Jackson one to their Jackson-5 mold). And, that, my friends, is only one of the ways Sharaun has kept up her fanaticism over the years. I can, for instance, remember when she absolutely freaked out when the n0w off-air VH1 show “Reunited” tried to get them back together (unsuccessfully), and then of course there was her 30th birthday cake…

So, when rumors began flying around the internet last year about a possible reunion, Sharaun reacted with the unbridled glee of a thirteen year-old girl. She became a regular in the online fan communities, all of them filled with “birds of a feather” from the key New Kids on the Block reunion-fever demographic: They’re all moms now, likely married, most went through a Backstreet Boys or N*Sync phase along the way, and they are all now finally blessed with the liquidity they so fervently prayed for back when they were initially smitten as poor, allowance-funded preteens. It’s brilliant, really, waiting until your insanely-obsessed base finally has disposable funds in the bank to stage a full-fledged get-back-together… temporal marketing at its finest.

Anyway, when those same rumors began to firm up, and it was announced that the band was going to make an appearance on the Today Show, not to play, but only to announce they once again would be playing, she sent out an Evite to all the thirty-something-year-old women we hang out with asking them over at 7am for a viewing party complete with donuts and coffee. I still remember waking up to go to work and seeing ten or so women congregated in our living room, the working of them outfitted in their work-garb, sitting on chairs placed ’round the television all waiting for the posters from their 1989 walls to come to life in front of their grown-up eyes. Some people even came in vintage band-branded clothing… it was, in a word, phenomenal.

In fact, I was home the day the New Kids actually took to the stage together as a group for the first time in over a decade, which also happened on the Today Show, a month or so later. And, friends, when that happened, I saw my wife transformed before my eyes. The braces-wearing adolescent in her broke free from the shackles that thirty year-old Sharaun keeps her locked up in, screaming and jumping her way into consciousness, shrieking with delight as five has-beens instantly became five are-agains before a fawning crowd of aging females in Times Square. I’m for real, it’s still on our TiVo if you don’t believe me… you can come on over and watch it for yourself. They dance and everything, it’s beautiful.

When their new single debuted on iTunes, she bought two copies for herself (because, of course, everyone knows digital songs eventually wear out), and sent eight more as iTunes “gifts” to her friends (thanks for that little bit of functionality, Mr. Jobs), who, I’m almost certain, are all busy re-growing their rattails and practicing trash-talk for all the “sucka MCs” in throes their reunion anticipation as well.

So, when she told me that she’d be spending “some money” on the “VIP passes” to their announced California shows, I, for what it’s worth, gave my blessing. In fact, when she told me how bad she wished she could see a show with Natalie, her best friend from all those years ago, I reluctantly admitted we have enough “extra” skymiles to get her back to Florida for the Tampa show. So now, my wife is flying more than five hours across the USA and back to meet her best friend since 1st grade (when she shared her Garfield pizza-scented scratch-n-sniff sticker) and spend hundreds of dollars on “VIP passes” which include front-row tickets and a meet-and-greet.

I know, I’m a good husband, right? But, if I want to be able to justify the hundreds and hundreds of dollars I plan to spend seeing Led Zeppelin wherever on Earth they tour this summer (please guys, please do it), I figure I better let her have her “one show” too. No, really, I’m willing to pay just slightly under my the-two-dead-Beatles-resurrect-and-they-get-back-together concert ticket threshold. Jimmy, Robert, John, Jason – just tell me how much you want, and I’ll have it in your wrinkled hands before you can close your mouths… and am even willing, just like Sharaun, to get on a plane.

Well, that’s the story of Sharaun’s obsession with the New Kids.

Oh, and, in closing… when I told her I was writing about the New Kids on the Block, she said, shocked, “What are you writing about them? You better not be writing anything bad! You should let me write about them, because I know ‘what’s up.'” I laughed. “I know Joey’s favorite food is Mexican,” she continued, “And his favorite color is green. His middle name is Mulrey.”

See… I told you. Goodnight.

5 Replies to “love is blind”